Unusual Items in our Suitcases 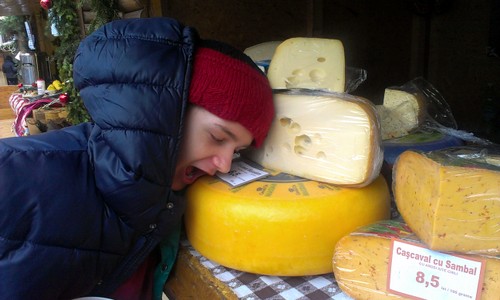 Obviously, packing for long-term travel is a bit different than when going on a short holiday. For our first 2 years of travel, we were very minimalist. I was surprised and proud of the fact that we had such few things considering all the crazy stuff we found in our US condo when we were getting rid of our stuff. Three-year-old grocery store receipts? After being on the road for awhile, though, one begins to “need” some simple but unusual things.

Surprisingly, good coffee can be extremely difficult to find in many places, especially in countries known for producing excellent java (they export all the good stuff). I suffered through Nescafé for 2 years and finally cracked in Thailand. I just couldn’t drink it anymore. Actually, seeing the name or packets of instant coffee always produced a disgusted look on my face. I picked up a press pot in Vietnam, but it’s awfully slow. In Romania, I came across a single-cup French press and decided it was worth the investment. Now I get real coffee everywhere we are! 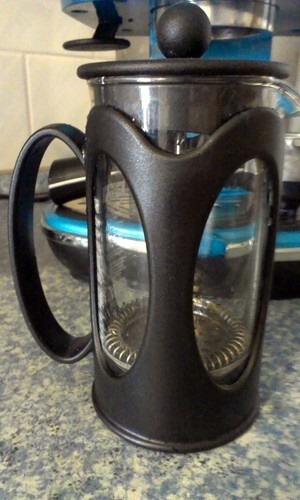 Then I discovered coffee cups can be quite rare when you’re in hotels and such, so I kept one of my gluhwein mugs from our time in Vienna. I am sorely tempted to start carrying an electric kettle, but I haven’t gone over that edge yet, thankfully.

I love spicy food, and there are only a few countries that share my affinity apparently. I’ve had challenges finding chiles to make my own salsa, and the store-bought stuff is barely stronger than water. When I found crushed red pepper in Romania, I bought it. And I also acquired a bottle of Tabasco. Now I have a little kick with me everywhere we go.

Are you shaking your head at me yet? 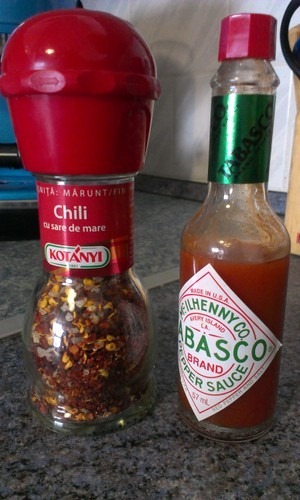 If I could figure out a way to keep bagels frozen, I might have to get another suitcase just for that purpose.

When we have an apartment or a room in someone’s home, we have access to a kitchen. I love to bake, and Tigger is always pretty happy about that. So far I have managed to do a good job of guestimating measurements, but some recipes are just more finicky than others. After making flat hockey pucks biscuits, I decided it was time to get some measuring spoons and cups.

And since a garlic press makes life a bit easier, and weighs practically nothing. . . yeah, that ended up in my suitcase as well. The board is only for decoration. 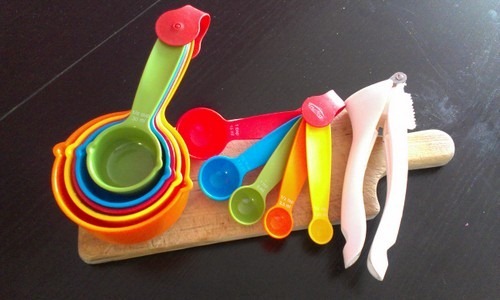 You already know about our cheese fetish. Two things are in rare supply or nonexistent in most apartments we’ve been in—a cheese grater (for cheesy eggs and mac & cheese) and a cheese slicer.

Another new addition from Romania was clippers for haircuts. I always get my head shorn. Mostly because I’m lazy when it comes to my hair, and I don’t want to have bother dealing with an afro when my hair is longer. With a clipper cut, I can get out of bed and be on my way. No muss, no fuss. When Tigger isn’t growing out his hair, he likes a clipper cut as well. He says it’s mostly because it’s cooler, but I know he shares my hair styling laziness.

In most places we’ve been, haircuts have been super cheap. However, after figuring out that after two uses the clippers would pay for themselves, a set went into the suitcase.

Yes, I’m slightly embarrassed, but unless you’ve been on the road living out of a suitcase or backpack for a long time you may not be able to appreciate how much these small items add to your life. Yeah, we can live without them, but they add such little weight and bulk to our luggage while making day-to-day life more comfortable, so why not?

Do you carry any unusual items in your luggage? Come on, fess up!