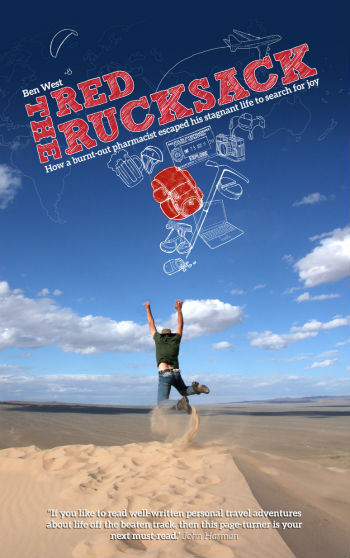 I originally connected with Ben West online when we were worked on a charity project by fellow travel bloggers. When we were doing a housesit in Australia, we were able to finally meet him in person in Melbourne. He was such a great person to spend time with that when he released his book The Red Rucksack I just had to read it.

Ben is an adventurous spirit. I admired hearing some of his stories about mountain climbing in Nepal, and he works with a charity there. He has such a great attitude about living so I had high hopes for his book.

When I began reading his book, it didn’t take long before I was laughing out loud. Ben has a great writer’s voice, and his frank attitude and ability to be able to freely share his embarrassing moments made the book all that more endearing.

This isn’t your typical travel book or your basic story of self discovery. Ben invites you to join him through his adventures, to meet the people he meets along the way, and to laugh your head off at his foibles.

You can purchase his book at The Red Rucksack’s website.