The Challenging Part of Trip Prep

When a single parent is preparing to leave the comforts of a middle-class existence, leaving a fairly secure job in a time of economic uncertainty, moving from a home that he rents for $500 a month less than what his neighbors pay, and dragging along his 9-year-old child on an indefinite trip around the world, one could probably easily come up with at least a thousand different things that might be viewed as “challenges.”

Aside from “How am I going to pay for all this travel?” there is the visa research that has to be done, the securing of certified documents that some countries require in order to procure a visa, getting his poor son additional shots, weighing the pros and cons of certain preventative medicines, finding homes for cherished pets . . . well, the list goes on and on. What’s the biggest challenge?

Decluttering. Yes, that oh-so-fun experience where you spend several hours, days, dare I say weeks?, going through all of your belongings and getting rid of them. This stack goes to thrift store for donation, this stuff is for selling, this goes back until we’re closer to departure, that will go into backpack, although I’m quite confident that last category will go through several incarnations before our packs are finally lifted onto our shoulders for departure. One would think that after having moved several times in the last 5 years there really wouldn’t be that much to go through. And one would be quite wrong. I have boxes of stuff I haven’t opened since I moved to Colorado from Texas upon finishing my residency program. Want to know the big surprise when I opened them? I didn’t need a single item.  So why did I keep them? I mean who really needs a grocery receipt showing I bought milk, eggs, raisins, and cantaloupe 5 years ago! 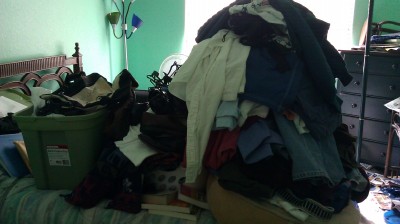 I wouldn’t feel so badly if it was just one receipt, but there were LOTS of things like that. Sure there was the occasional nice surprise. For instance I found pics from when I was in my 20s and practically unrecognizable from my current self. In fact Tigger even looked at them and said “Who is that? Was he your friend or something?” Bigger belly, clean-shaven face, and the biggest shocker was the black hair which is a big contrast from today’s mix of black, white, gray, and silver hairs. “Whoa! You had black hair!”

Pictures I understand. Grocery receipts not so much. And then there was my geek collection: Two portable printers (one a Canon inkjet and the other an HP photo printer if anyone is interested in buying them from me), two laptop bags (one with wheels and a section for holding files from the travel-for-work days), some old cell phones, and my favorite find: A phone outlet adapter so I could plug my modem into the phone outlet without having to unplug the phone from back in the days when WiFi was pretty much only for telemetry, before cable was both TV and Internet, and DSL was probably someone’s dream still. Spiffy, no? Someone suggested I submit it to a museum. 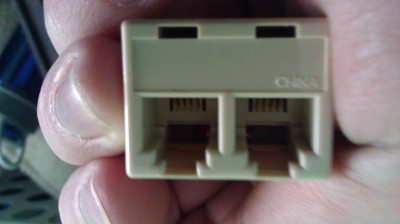 I found it interesting that Tigger and I found so many things we absolutely had no problem getting rid of, but the one that caused me the most perplexion was my massage table. Sure, it was expensive, and it’s in absolute mint condition, but why did this one hold me back? I have no plans on returning. And a big part of this type of travel for me is learning how to do more with less. Yes, admittedly I’m a pack rat, and growing up with having so little to my name seems to have produced the opposite effect in my adulthood. Funny that the idea of carrying only what can fit into a small backpack around the world indefinitely seems to be absolutely no problem, but the table gave me pause. Perhaps it’s the idea that I would have SOMETHING remaining back here, besides friends, just in case this whole crazy idea didn’t work the way I imagined it. I finally decided it would be part of a spiritual practice to go ahead and sell it. One more way to show the universe just how committed to this whole thing I really am. 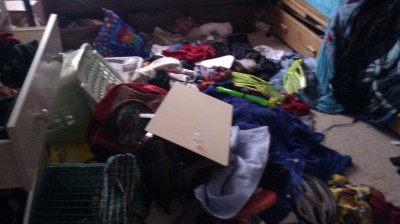 Tigger's room as he decluttered

It has been somewhat liberating to see more and more of our items leave the house. Tigger’s room is finally off the FEMA database as a disaster area, and I can actually move around inside my closet. It’s also a nice visual reminder that our trip is coming and that my life is getting more & more . . . simple and unencumbered.