Swimming With a Bus

Sure you see the pics of whale sharks and think Wow, they’re really huge! But you really can’t absorb it until you’ve been in the water with the behemoths. With this in mind we headed to Isla Mujeres, Mexico.  We jumped aboard the bus in Playa del Carmen and went to downtown Cancun, crossed a busy street, and then waited in line for our hot, sweaty colectivo ride to Puerto Juarez to take the 20-minute ferry ride to Isla.  I had done some Internet searches before we went and was a little nervous about spending $150 per person for this unique experience.  Tigger had his heart set on it, and to be honest so did I. However, I also knew we might get the chance again in Belize or Honduras, and quite possibly for less money. But did I really want to take that chance and wait?

After walking around and finally finding a hotel cheap enough to not make me whimper, we dropped off our stuff, turned on the AC and headed to the beach.  We passed enough touts to put me in a surly mood by the time we reached the first stand selling the trips. They wanted $125 per person firm, no price break for Tigger.  We kept walking.  I finally found one who seemed much more eager to fill his boat, and we managed to get a price of $86 per person. A LOT more like it. So we went ahead and planned on it. 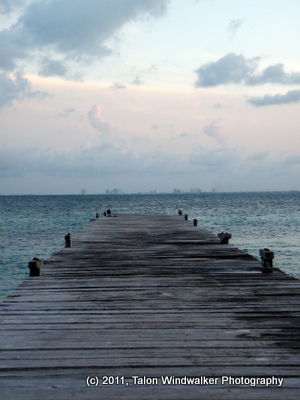 After a delicious dinner at the taco stand by the cemetery (great food and HUGE tamales), thanks to a friend’s recommendation, we continued exploring the small island. We were both excited and got a good night’s sleep thanks to walking around for hours and being in an air-conditioned room. Totally worth the extra $4 a night!

We had to get up earlier than either of us wanted, but we managed to find the right street to walk down to meet up with the captain.  Along the way we passed yet another tout. I was in my “no gracias” and ignore mode, so walked right past him when he tried to sell me a trip.  “Special deal!” he called loudly. Yeah, yeah, sure. Heard that only, what, a bazillion times a day. “$78!” he said in Spanish.  I stopped dead in my tricks. Did I hear that correctly? “¿Cómo?” He repeated it again but in English.  Seeing the stunned look on my face he incorrectly assumed I either didn’t understand either language or was somewhat deaf, so he pulled out a big white placard that said “$78 US.”  I walked over and confirmed we were getting a similar deal as the other company and then quickly handed him the money before he could change the price.

We joined a small group of other people and headed out for our big adventure.   As we searched and searched, and now 2 people had succumbed to seasickness, we finally saw a large, dark shadow just beneath the emerald waters. Our guide quickly donned his gear and shouted instructions to the 1st group of people to jump in. We were a little concerned when one of the ladies jumped in and then shot back out of the water screaming, but Tigger and I were resolute. Unless she came back into the boat missing body parts, then I’d have to rethink our decision.  I was even more curious when another group jumped in, and the man was out of the water just as rapidly, but minus the scream.

It was our turn now.  We jumped into the frigid water (where was our nice warm water from Cozumel!) and immediately stuck our head into the water.  It was so murky we could barely see our hands in front of our face.  Nothing but cloudy, green water, and then suddenly there it was right in front of us, inches from my face.  I understood our shipmates’ responses now.  I snapped my camera button furiously hoping something would show up, and then it was over. 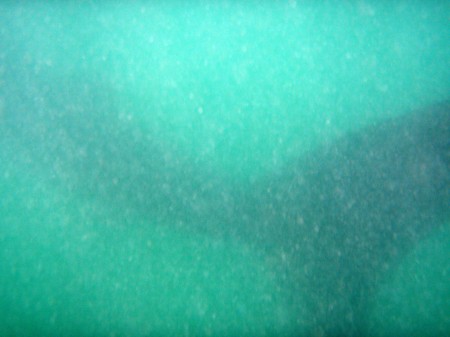 We climbed back on the boat and watched as several other groups jumped in as we chased the seemingly oblivious shark into clearer waters.  It was finally our turn again as yet another snorkeler was down with seasickness.  We looked around anxiously as we swam with our faces in the water, and then a massive head appeared.  We were right in front of it, hovering just inches above as it moved lazily beneath us.  My heart raced with excitement as I watched the large spotted body slide along effortlessly. For a moment I wondered if we would ever see the tip of the tail pass, and then it finally did. As soon as we were out of the water, Tigger excitedly told me “His fin touched my belly!”

Back in the boat he couldn’t stop chattering.  I was so thankful for the nice ladies from the Netherlands and the Swiss couple who listened to his endless chatter for a couple of hours, although, to be fair, one of them didn’t speak English so she cheated.  When we got back to the island, the boat anchored in the shallows so we could snorkel while they prepared our ceviche for lunch.  While we waited for them to secure the anchor, my son jumped onto the edge of the bow and loudly proclaimed “I’m the king of the world!” Something I’ve heard while on snow, sand dunes, large blocks of cement, you name it.  While snorkeling Tigger and I discovered a huge starfish.  He was so enthralled that when his Dutch friends jumped back into the water, he led his first snorkel tour to show it to them. 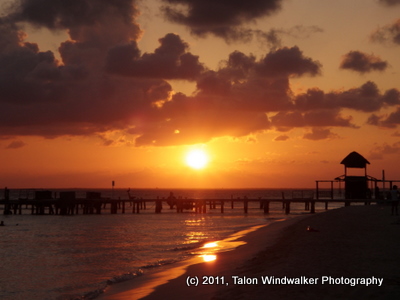 When he got back into the boat, after ensuring his tour group were settled in, he looked at me with his trademark broad grin on his tanned face and said: “Cozumel has a lot better snorkeling.” But at least he got to touch his first starfish “in the wild.”  And the whale sharks were pretty darn amazing, too.  In fact he hasn’t stopped telling random people in at least 2 countries so far, whether they care or not.  I don’t think they can resist his excitement, though.