What About Tourist Safety in Cancun?

Home » Mexico » What About Tourist Safety in Cancun?

Anyone who knows me knows that when someone mentions going to Cancun, I make a face. For many people, tourist safety in Cancun is a big question, as well as “Will I be able to avoid all the crazy party people?” (Yes, just don’t go during Spring Break season.)

Cancun just overall doesn’t do anything for me, but after being on a small island in the Yucatan for a few months, we decided to play tourist for a change. We were flying out of the Cancun airport, so in spite of my typically not so fond feelings toward the city, we headed there.

I wanted to make sure to be far away from the super touristy hotel zone, so I found a nice hotel that was within walking distance to most things we needed and places we wanted to go.  The top of my list was Indian food. It had been 1-1/2 years since I had REALLY good Indian food.  My friend Earl absolutely loves India and has spent a lot of time there.  When he lived in Playa del Carmen, they would make the 45-minute to 1-hour drive to Cancun to eat at a specific Indian restaurant.  I figured if it had left him with that kind of impression, we were going.

It was some of the best Indian food I’ve ever had. I was disappointed by the mango lassi which was really more like a mango smoothie, but everything else was completely delightful.  Prices were very reasonable as well.  The lack of a crowd of customers might be a turnoff for some (and normally would have been for me), but it actually made the meal more enjoyable. 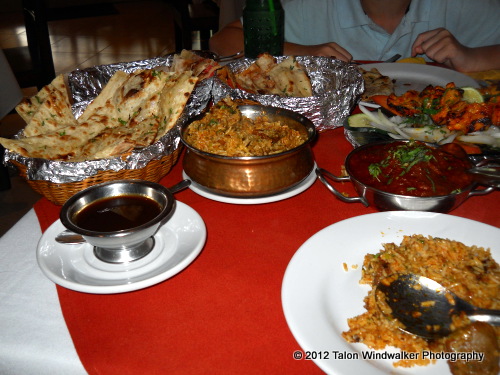 I went a little crazy

Tigger’s main attraction was a mall.  He loves malls.  Mostly because they typically have game stores, and he loves his video games.  The mall was enormous and had a great food court.  Normally, I would’ve run away from this place, but I was ready to . . . go a bit gringo.  Tigger hit up Burger King, and I went for Cajun.

One of the other things I wanted to do was surprise Tigger by taking him to the water park.  He loves water slides.  I found a place called Wet ‘n Wild. The price was a bit steep, but then I discovered it’s an all-inclusive place (including alcohol!) and that clinched the deal.  I don’t often use the “Hey, I’m a travel blogger wanna make a deal?” pitch, but seeing as we were living off budget this week and I was already sweating a bit about our upcoming European price tags, we exchanged a couple of emails, and they kindly offered us discounted tickets. 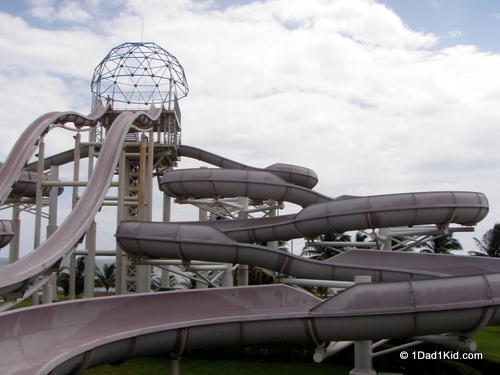 I had read some pretty scathing reviews about the food at the water park. I don’t know what people were expecting because I found the food to be pretty typical of theme parks, and in some cases was much better.  They had different “restaurants” (including a brick oven pizza place) and snack bars scattered throughout the park so you were never far from food or drink.

Going in October also meant we had nice, warm weather without a bunch of crowds. None of the rides had any real lines. The park isn’t huge, but it had enough of a variety to make spending the day there enjoyable.

When our friends we had met in Cozumel joined us in Cancun, we left the kids in the hotel so they could play while we  enjoyed some adult conversation and meandering.  I have heard about safety concerns in Cancun especially.  When those warnings came from locals living there, I paid a bit more attention.  However, I’d have to say the area we were in felt safe.  We walked for quite a distance, including down some poorly lit side streets, and never once felt threatened.  After a couple of nights of walking around, I wouldn’t hesitate to go out again.

Perhaps not being in the big tourist section made a difference.

I was a bit surprised by Cancun.  I had expected mass tourism, an even larger amount of touts than Cozumel, and needing to be extra cautious when walking around.  Staying outside of the hotel zone gave me a much better experience.

To answer the first question more completely, though, let me say that I think tourist safety in Cancun is not really an issue. No more so than it is anywhere else in the world.  Bad things can happen ANYWHERE.  You still have to be mindful of safety, just like you should be in your home town, but I wouldn’t hesitate to recommend Cancun to someone who was interested in going.