Initially, the small Thai island of Koh Samui wasn’t on my radar. There were other islands that had scuba diving that had been calling my attention, as well as some others that friends had recommended. But, when we were offered a housesit in a bungalow practically on the beach, well, Samui was suddenly on the map.

AsiaRooms.com offered to host us for a couple of nights in a lovely condo hotel before our gig was scheduled to begin. After 20+ hours of travel, I was looking forward to a resort-style break. This would going to be our introduction to Thailand, and we were both excited. 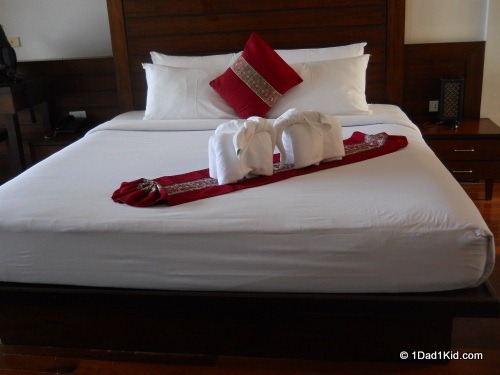 We had a rather unusual greeting upon our arrival. People wearing normal street clothes (i.e., nothing identifying them as hotel employees) kept insisting on taking our luggage. When we went into the office, we were instructed to leave our bags outside. After finishing the registration process, we discovered our bags were no longer where we had left them. It was only after expressing my alarm that we were informed they had been taken up to our room.

I greatly appreciate that their eager staff wanted to schlep our luggage up two flights of stairs for us. But it would be a really good idea to inform a guest that is happening, and it might be a good idea to have your staff wearing something identifying them as employees. Having some random guy grabbing at a traveler’s luggage can be a bit unsettling for some people.

Our room was incredibly spacious and had some really nice features including a kitchen complete with an oven (not common at all in Southeast Asia) and a bathtub. It’s so funny how a bathtub can make such a difference when you’ve been traveling for so long. 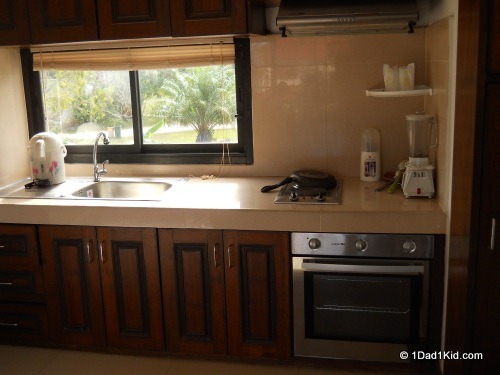 I wasn’t too pleased, however, to be told that the Internet didn’t work in the rooms. “Only in the pool area.” Especially when the hotel’s page advertises “in-room broadband.” Luckily, we checked anyway and discovered that if you stayed in a specific few areas of the room, you could indeed access the signal.

After a much-needed nap, we hit the road to do some exploring, which is when we discovered that the establishment is a bit far from a lot of places. Having to rely on Samui’s rather expensive taxis was not a joy, especially when most of the drivers had no idea where the condo hotel is located. Thankfully, the hotel’s phone number is found on the room key so our driver could phone someone and get guided to the site.

During certain hours they do have a car that can take you to local places apparently for free (but charges for pickup on the return trip). They did occasionally take us longer distances and charged less than most of the taxis would, so that was appreciated.

After picking up some food items at a convenience store, we returned to our room and realized there was no microwave. Why a hotel would go through the effort to include a full-size oven but then omit a microwave seemed. . . interesting to me. In addition to that odd oversight, kitchenware (like plates) was also surprisingly lacking. 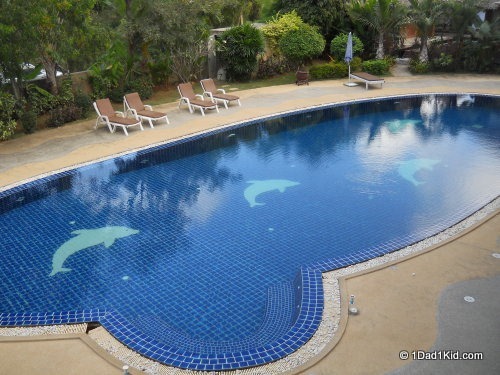 Additionally interesting was the bizarre practice of disconnecting the WiFi throughout the hotel campus at night.  This necessitates waiting for someone to show up at a rather leisurely hour the next morning before it is turned back on. For someone simply on holiday, that’s probably no big deal, but when you state you offer Internet and don’t bother to mention it’s only available during certain hours, that can really affect some people. Especially those of us who rely on an Internet connection to work and conduct business. Although one of the guests I spoke with who was on holiday was rather irritated about this as well.

The bed was extremely comfortable, and the AC unit worked quite well. The power to the room shuts off when you leave (since you have to remove your key from the special wall unit), but it never took too long for the room to cool down when we returned.

The large terrace was another nice feature and made enjoying a meal in the cooler night air a wonderful possibility. 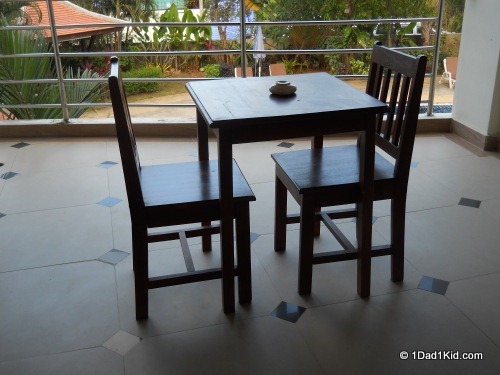 There is a lovely pool with very cold water. That kind of surprised me since it was so hot outside, but it was very refreshing.

The included breakfast is quite good and plentiful. The kitchen staff we spoke with had very limited English skills so it made ordering scrambled eggs for my son a bit more challenging. They definitely embody Thailand’s nickname of the Land of Smiles, though, and laughed along with us as I mimicked scrambling an egg.

The seclusion is a bit nice at night as it means you aren’t next to Chaweng Beach’s many bars and clubs so a peaceful sleep is very easy to obtain.

Having spent a good amount of time on Samui, and having visited her different neighborhoods, I’d overall have to say that your money is probably better spent elsewhere. The island offers many very nice accommodations that are more easily accessed and that get you a bit closer to some of the areas you’re likely going to want to visit.