Bucharest is a pretty large city that is quite spread out. Thankfully, it has a really good public transportation system comprised of trams, trolleybuses, buses, and the metro. It has the wonderful addition of also being quite economical, even for taxis. In this article, I’ll give you some tips and links to helpful apps.

For prices listed below, RON is the foreign exchange code for the Romanian currency; however, it is also known and written as leu (lei when it’s more than 1—1 leu, 3 lei). Lei is pronounced like the English word “lay.”

There isn’t much difference in terms of speed of transit between the various above-ground vehicles, but as it can change where you need to wait, let me give you a bit of a description.

Stops usually have a red and white sign indicating the name of the stop as well as listing which lines stop there. Always double check these signs as a few stops may share the same name (Aeroport Baneasa, for example) but be located quite a distance apart. 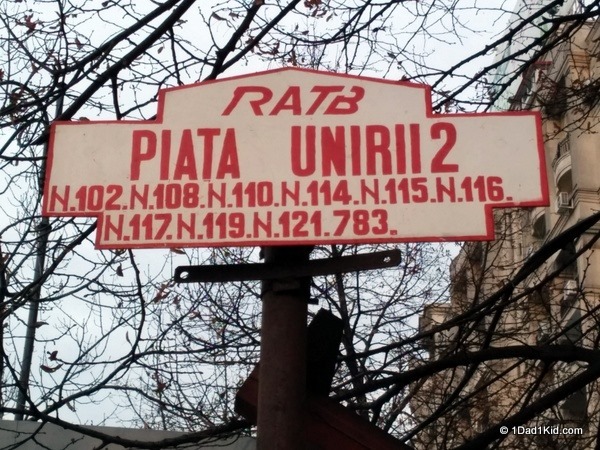 These are pretty much what you would expect to find anywhere else. In the winter they are heated, and in summer they are air conditioned. Sitting is limited availability. The newer buses have visual and audible displays that announce the upcoming destination as well as a visual indicator of which lines connect at that stop. The displays and voice don’t always work, so don’t count on your bus having that.

Buses will usually pull into the space created for them so that they are near the curb. However, often taxis and cars park in the spaces so that the bus has to remain in the flow of traffic. Sometimes there is a small shelter, but often your only hint that it is a stop is the presence of benches or how the curb curves inward from the street. The red and white sign isn’t always obvious.

Note: Routes that begin with an N indicate they are the late night routes which usually kick in after 11 PM.

In other areas of the world, these are often called trolleys. They are cars that follow rail tracks in the road. Sometimes their stop is located next to the curb, but often you wait on an island in the middle of the road. There are usually crosswalks leading to the island. They follow the flow of traffic, so it can be helpful to know which direction you’re heading so that you pick the right waiting spot.

Unfortunately, these can be a bit of a rough ride, are often noisy, and it isn’t uncommon for them to have a strong scent of urine.

These are buses that run along elevated electrical wires. Because of this, they generally stop in the road rather than next to a curb.

Like many cities, they do not use paper tickets, and the drivers will not accept cash. Instead, you need to pick up an Activ card. They’re super easy to use, but lately it has been a challenge to find anywhere that sells them! Near stops, you’ll often spot a grey and white kiosk. These are the places where you can recharge (put more money on) your card. Some of them sell new Activ cards.

To get a new card, you want to go to a kiosk with a sign that includes the word “centru de emitere” on the sign. Any kiosk can recharge a card, though. Just don’t be surprised if you visit a kiosk that doesn’t have new Activ cards. Hopefully this issue will be resolved soon.

So what do you do if you can’t find a card? Well, either take a taxi or go ahead and ride. It is pretty rare for the company’s inspectors to ask for your card (although it does happen). If you explain the problem, likely it won’t be an issue since the lack of availability of the cards is well known. The fine, however, is 50 RON (under $12 USD). It’s rare to see locals even using the cards.

I’ve had many expats tell me not to even bother getting a card, but I disagree with that. We’re guests here, so I believe we should try extra hard to follow the laws. If you try to get a card and can’t find one, that’s a different issue.

For most routes, the fee is 1.3 RON (about 31 cents USD). The express routes (buses to/from the international airport) charge 3.5 RON.

Older kids are eligible for discounted fares, but I can pretty much guarantee you the effort is probably not worth it. If you’re going to attempt it, get a Romanian-speaking friend to accompany you because many of the kiosk staff do not speak English. You will need to bring some documentation with you if you decide to  try to get the special discount.

One card can be shared between multiple people.

If you have a Romanian phone provider, you can get tickets by SMS; however, they are more expensive. They are essentially a full day pass, but you’d have to take more than 6 trips within a 24-hour period to make it financially feasible.

The SMS ticket does not work for the express buses.

Google Maps is actually pretty helpful. Their information is mostly accurate (occasionally their number of stops is off). If you’ll have data for your phone, you definitely want this app on your phone (for iPhones).

Note: Google sometimes gives you really weird travel times. For instance, it will say it’s a 54-minute trip, but if you do the math on the time estimates it lists for walking to the stop, completing the ride, and walking to your destination, the difference can be huge (sometimes even 30 minutes less!). So focus on the actual walk and ride times instead of the time it initially lists near the clock icon.

This website is pretty good as an online planner, although I feel like Google Maps is a little less confusing. The transport company also has an app (Android/Apple). After comparing it with Google Maps for over a month, though, I haven’t found it to be much of an advantage. It does list the various routes along with maps and a list of stops, which can be helpful, but that’s really the only pro beyond Google’s app. Frankly, I’m not sure it’s worth downloading.

If you want an SMS ticket, you can also purchase it through the above app.

Bucharest’s metro system is really good for getting around the center of town. One of the big advantages is that it isn’t hampered by the city’s rather congested traffic.

Again, it’s very affordable. One ticket is 5 lei (about $1.22 USD) and is good for 2 trips. If you plan on using the metro a lot, you can pick up a 10-trip ticket for only 20 lei, and a daily pass (unlimited trips within a 24-hour period) is 8 lei. There are multiple options for metro tickets.

Note: The metro prices increased on March 28, 2015. The above prices have been updated to reflect that change.

Unfortunately, there isn’t currently a combined pass/ticket that works on both the bus and metro systems.

When it’s rush hour, it’s a great idea to use the metro system as much as possible.

The older trains usually do not have any announcements or displays, but they do have maps so you can at least count the number of stops. The newer trains offer visual and auditory notifications and are bilingual (Romanian and English).

These are fairly cheap in Bucharest. Most of them will automatically use the meter so it tends to be hassle-free. The only time I’ve really experienced issues is at the train station. There is a line right by the entrance, and they tend to be more aggressive, especially if they pin you as a foreigner. These drivers will usually overcharge you. If you cross this area, you’ll see another line of taxis. These will usually turn the meter on and not give you a problem.

Generally speaking, you will need cash. The premium taxis (Mercedes Benz) will accept credit cards (and you don’t need a card with a chip), but you’re paying almost 3 times the normal rate for that privilege.

Taxis are usually easily flagged down, but you will often see a bunch parked waiting for customers.

Apps for ordering taxis are quite popular in the area, and some of them are very handy. Many people recommend one called Speed Taxi. In my experience, however, it rarely ever functions well. I’ve actually yet to get a taxi through their app.

Instead, I recommend the Meridian app (Apple). This is much easier to use and more reliable. There is also a cost control measure you can activate once you’re picked up so that you can make sure you are being charged correctly.

Scara = This is the door number for the apartment block. It is sometimes abbreviated as “Sc” above the entrance.

Mesaj. . . = You can enter a special message for the driver. Most of them speak a decent level of English.

Once you’ve entered this information, click on Trimite comanda. This begins the taxi location function. Once one accepts (usually about 1-2 minutes), their car will appear on the map so you can track it. It will give you the estimated arrival time and will also show you the taxi number so you know when it pulls up if that is the one you summoned.

You have a few options to get to the city from the airport and vice versa.

This takes about 45 minutes to get into the center of town/train station (see above for fares). There are 2 buses that make this route—780 and 783. The 780 goes to the Bucharest train station and main bus terminal (for intercity and international travel) while the 783 goes to the city center.

You can view their time schedule and stops here.

You will see a line of taxis waiting at the arrivals area. These will generally charge you almost 3 times more than taxis you order from the yellow machines near the door. If you order a taxi, you’ll have a longer wait, but it could be worth the savings if you’re making a longer journey.

Probably your best bet, if this is your preferred method of transport and you don’t want to wait as long, is to go to the departure area and get a taxi that is dropping someone off. You’ll get the 1.4/km RON rate and far less hassle as they’ll likely be happy to get a paid fare to return to the city.

Lastly, there is a train to/from the airport. You have to transfer via shuttle bus to get from the train station/airport. It costs about twice as much as the bus and takes the same amount of time, or even more, when you factor in the shuttle transfer.

It also doesn’t run as late as the bus.

What else would you like to know about public transportation in Bucharest?