Living in Darkness with PMDD

When Melissa of Break Out of Bushwick offered to share her story about life with premenstrual dysphoric disorder (PMDD) for our Living in Darkness series, I was quite interested. We don’t hear a lot about it, but there are many women who suffer from this type of depression. Often they are treated like “silly little women” and not taken seriously. I appreciate her willingness to share her story and hope it will help others. 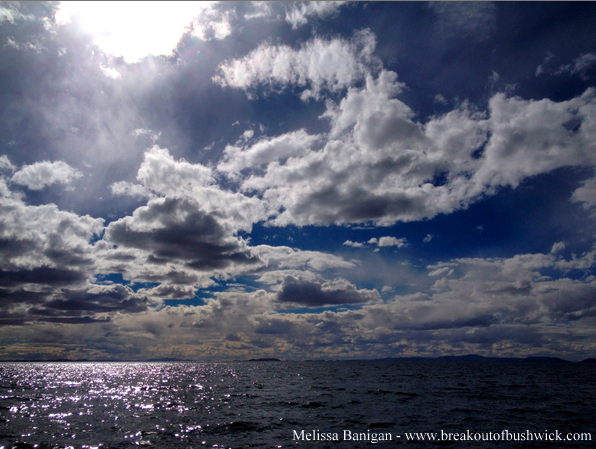 It happens in a flash. One moment, I’m project-driven, loving, almost manic in how many amazing things I can get done in a day. I volunteer my time at a local group for children, cook with my kid, plan travels and race through the streets of New York. I’m imbued with a love for everyone I meet and a passion for every new place I visit. I am Super Mom and writer extraordinaire. I take my kid on adventures around the world and live life to the fullest. You can almost SEE the light shooting from my eyes. I’m on fire. And it’s beautiful… I’m beautiful.

Then, every month, like clockwork, the switch is thrown. It begins in my blood—I feel it race through my veins, my heart skips a beat, and I need to stop whatever I’m doing to close my eyes and rub my temples. By the time I open my eyes again, I’m changed. I look into the mirror and see someone vile, wicked and ugly. Terrible thoughts cloud my judgment. It might be sunny outside, but darkness descends. It’s bad enough in the comforts of my home back in Brooklyn, but at times when I’ve been on the road with nothing to ground me to my routine, it has felt catastrophic.

This folks, is premenstrual dysphoric disorder, otherwise known as PMDD. It transforms women living with it into two people—like Dr. Jekyll and Mr. Hyde—only without, you know, the murders. 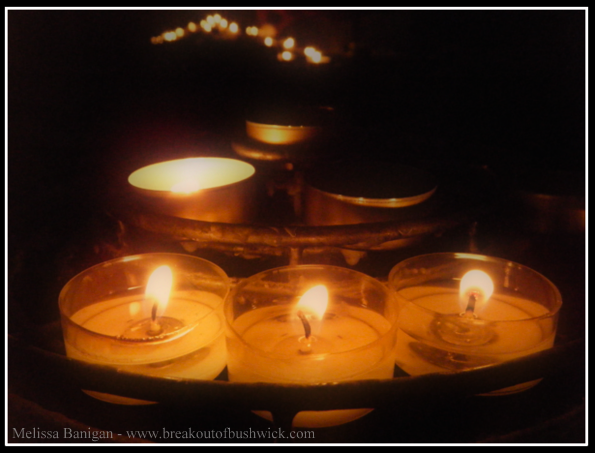 PMDD was thought for a long time to be a severe form of PMS because it follows a monthly, cyclic pattern, but in 2007, a genetic connection was made: women suffering from the disorder have variants in the estrogen receptor alpha gene. This variant is ONLY found in women with a variant in another gene (catechol-O-methyl transferase), which is vital in regulating the proper function of the prefrontal cortex, the area of the brain that controls our moods. Often, PMDD lowers serotonin levels, a neurotransmitter associated with mood, learning, and sleep.

In plain speak, this means that women like myself who have variants of these genes have quite real symptoms that, at least in severity, surpass those of psychosomatic PMS, and, if left untreated, can lead to real hardship. Some of these symptoms include:

I’ve suffered from all of the above symptoms. Looking back, they began around the age of 8, right around the time my body started slowly entering adolescence. For most of my life, I alternated between two states of being—elation and depression. Doctors were quick to say that I had manic depressive disorder. But something about their diagnosis didn’t ring true.  See, I didn’t always feel my debilitating symptoms. I just had them for about a week and a half to two weeks out of the month, in the luteal phase of my menstrual cycle, before I got my period.

Because many of the symptoms of PMDD are similar to those of manic depression or other depressive disorders, doctors often misdiagnose women with this cyclic disorder. Many women are put on selective serotonin reuptake inhibitators (SSRIs), which are most often to treat depression, when, in actuality, they are dealing with PMDD. Perhaps if I had been diagnosed earlier (this is a relatively “new” disorder, only being properly named in 1993), I might not have had risky behaviors in my youth and young adulthood, ran away from home, thought the world was against me, or ruined romantic relationships by acting, well, completely batsh*t crazy. I might’ve felt more confident and gone after my dreams far earlier in my life. Who knows? It’s best not to dwell on the would’ves, could’ves. 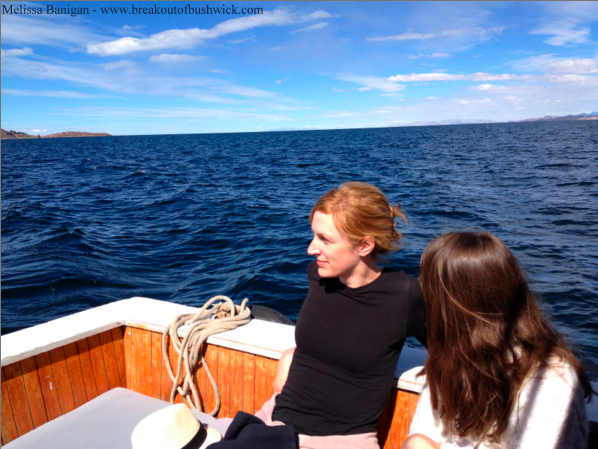 It used to be that women who exhibited symptoms of depression, despite having cyclic symptoms, were diagnosed with already established depressive orders that focused on diagnoses and treatment for men (much in the way that heart disease had been diagnosed and treated, ignoring entirely the special set of symptoms that primarily women have). Treatment typically involved prescriptions of a set of drugs that affect mood.

Now with PMDD being a recognized disorder, women are being treated differently. SSRIs are still being prescribed, but in different dosages and durations. While previously these drugs weren’t found to be of great help, now they are highly effective. Some women are also being prescribed with hormonal birth control with varying degrees of success.

I learned about my PMDD in February 2012, just months before leaving for my first international travel with my daughter. While it felt great to be given a diagnosis, I didn’t yet know what to do about it. Indeed, I ignored it. As a result, I ended up having a difficult time while traveling that coming summer.

A couple of days before leaving for Iceland, I felt the “switch.” It really was as black and white as that. At the time, with PMDD, there was no gray. No in-between. I tried to shake the big, bad uglies, but preparing for two months on the road didn’t make things any easier, and ensuing jetlag certainly didn’t help. My daughter and I started our travels in Iceland. We were so busy that it was easy to keep the worst of my symptoms at bay, but by the time we flew onward to Paris, I was a wreck.

It should’ve been the time of our lives. We were in PARIS, after all, the CITY OF LIGHTS!! Yet one can look back at my blog and see that posts from last summer were few and far between. I’m only now beginning to fill in the blanks. When people ask my daughter about the best and worst of the trip last summer she says, hands down, that mountain climbing in various countries was awesome, but that our time in Paris was the worst.

Oh, we did things. I dragged my kid all over the city. But I was a dead woman walking. So tired. I have huge blanks in my memory. While I know that we visited Notre Dame, I only know I was there because of the photos I took. And when I saw the famous  ‘love-locks’ secured to one of the bridges over the Seine, for reasons still beyond me I wept. I barely talked to my lovely girl, and when I did, only had foul or sharp-tongued things to say. Our lovely little apartment in Saint Germain des Pres felt like a loony bin. I took long showers just to have a place to weep. My poor daughter, imprisoned by my moods, made the best of it, but my God, it couldn’t have been much fun. I withdrew from the world. While our ten days in Paris could’ve been filled with visiting old friends, we only got together with people a few times. I intentionally cut myself off, taking my girl along with me for the ride. I shiver now at the thought. 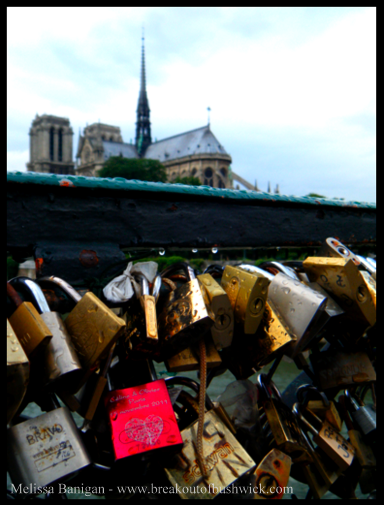 Eventually, thankfully, I got my period. I always know when I’m about to get it, because just hours before, my mood miraculously lifts. I know it sounds nuts, but I can literally feel it in my blood. A calmness washes over me and relief, sweet relief, comes with the rebalancing of chemicals such as serotonin coursing through my body. Not to get too graphic, but I don’t think there’s another woman on this planet who looks forward to getting her period as much as me.

After returning from Europe, I started to aggressively look into treatments for my disorder. While there are fabulous, innovative Western doctors here in New York who specialize in PMDD, I wanted to first go a more holistic route. I visited an herbalist in Manhattan who suggested I take chaste tree berry. This plant has proven to influence levels of the hormones progesterone and estrogen by reducing the production of prolactin. Some studies of chaste berry have shown it affects the pituitary gland. Who knows? All I know is that, in conjunction with drinking copious quantities of red raspberry and red clover teas (as opposed to how I used to treat myself, with red wine!), my monthly symptoms started to if not disappear, become a little more manageable.

I also visited an acupuncturist who advised me on dietary changes, and treated me solely for PMDD. It helped, and I now follow my diet more closely and take vitamin B. All good stuff.

This summer, my daughter and I went to Peru for a month, and, as opposed to last summer, I didn’t turn into a basket case. I took my chaste berry religiously every morning and evening, and popped a vitamin B tablet once a day. More importantly, I reached out to people when I started to feel the doldrums and wrote on my blog every couple of days. Although I wasn’t writing about PMDD, staying connected with people made all the difference in the world. I didn’t feel so…alone.

In the last year, I’ve devoted two hours of every week to writing in a journal about my mood. Not my adventures, not my conversations, not the books I read, only my mood. I take these two hours to touch base with Mr. Hyde. If I find that two hours isn’t enough, I tack on another two hours. In this writing, I note every time I looked in the mirror and felt like a monster, and write down when and where I felt the ‘switch’ occur. This has become a vital part of my routine and is one that I can bring with me wherever I travel. Listening to oneself can and should happen regardless of location.

In sum, I would just say that PMDD isn’t just a disorder that affects a traveling lady like me. Just ask my kid, my family and friends, or anyone I’ve ever been romantically been involved with who has had to deal with me. I think it’s time to dismantle the stigma attached to women’s mental health disorders, and the only way is to talk about it. So, here goes, loud and clear: PMDD is real. It’s ugly, mean, and dark. But there are many paths to escaping from its grip.

Mr. Hyde, I’ve got your number. Next time I travel with my kid, you are NOT invited along.