Living in a Culture of Fear

Home » Musings » Living in a Culture of Fear

Safety is a regular topic I run across.  Aside from being told how brave I am for adopting as a single parent, much less leaving our old life behind to begin a journey as a full-time nomad with my son (who was 9 at the time), I am frequently asked about safety for traveling in areas like Latin America.  In the blogosphere and Twitterverse, I regularly see posts, questions, and comments about the safety of travel.  When we were preparing to leave and to travel to new areas, I was told many times how unsafe Mexico, Cuba, Guatemala, Honduras, and Colombia were.  These well-meaning comments were usually accompanied with an admonition to “be safe.”  Yes, because life in the United States is oh so  much safer. 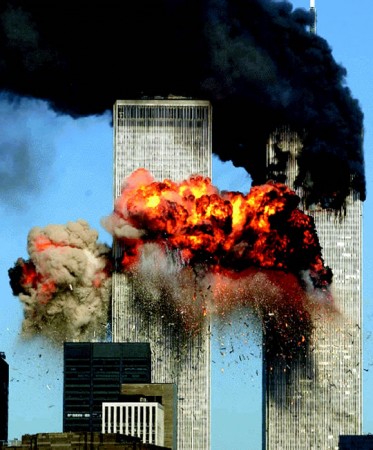 We live in a culture of fear.  Why?  I’m sure there are many reasons, and I would offer that the media holds a lot of blame, particularly in the States.  No, this isn’t a post bashing my home country.  But we have to admit something is wrong when I was living in the US and could find more about what was happening in my own country by reading the online news sites from foreign nations than from TV channels and sites at home.  The media is so hungry for a golden ticket that it will devote hours of energy to the activities of a presidential candidate when he was a high school student almost 50 years ago then to horrible ethnic cleansing happening on the African continent.

Okay, I got distracted there.  The fact is a culture of fear sells.  I remember being riveted to the TV and radio for days during the LA riots after the policemen who had beaten Rodney King were acquitted of their crimes.  And I will never forget that morning on September 11, 2001, when I came downstairs to hear that a plane had just crashed into one of the Twin Towers in New York City.  I was watching the report as the second plane crashed thereby erasing any doubt that the US was “under attack.”  My home office was in another room, and I had a special card in my PC so that I could watch TV on it.  I had it open the whole day and emailed regular updates to my partner while they taught school. 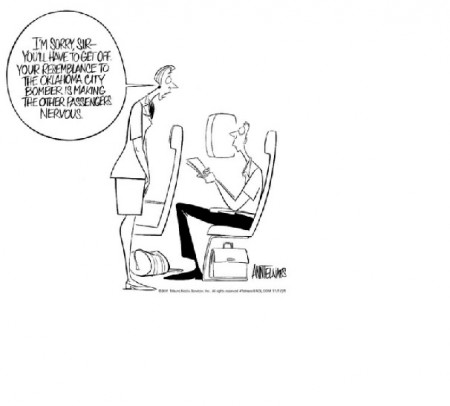 I’m sorry sir, you’ll have to get off. . . your resemblance to the Oklahoma City Bomber is making the other passengers nervous

When I had to fly shortly after 9/11, I’ll admit I was nervous.  I’m a person who has tries to never judge someone by the color of their skin, their religion, or their socioeconomic status, but I found myself carefully eyeing any person who appeared Middle Eastern.  I remembered this years later when I came across the above cartoon while preparing a presentation on multiculturalism.  How often have you entered a federal or government building and been on the lookout for a Timothy McVeigh look alike?  After all, his act of domestic terrorism killed 168 people, injured more than 680, and destroyed or damaged 324 buildings!

Those attacks spurred a drastic change in America, and in many places throughout the world.  Because of that event 11 years ago, air travel originating or arriving in the States has drastically changed.  Liquids are strictly controlled, shoes must be x-rayed, and in many US airports a passenger may have to choose between having a whole-body scan (in which the person appears naked to the remote viewer) or having their genitalia groped by an officer.  I was especially surprised at the nude imaging and groping in a seemingly puritanical country where the natural act of breast-feeding is being touted as indecent exposure.  But this is different because “it will keep us safe.” 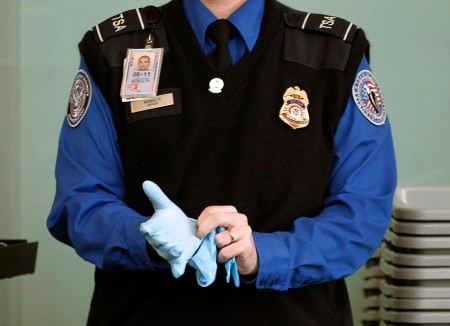 “Our safety as a nation” has fueled an equally unprecedented attack on civil liberties in the US, one which constantly rapes the rights that have been previously held as sacred by the nation, its citizen, and its courts.  This same reaction has led to budget-busting wars in foreign nations that have directly claimed the lives of hundreds of thousands.  Don’t worry, I’m not going to get political, but here are some sobering numbers to consider:

The 9/11 attacks took the lives of 2977 people (not including the 19 perpetrators).  So far we are spending at least $100 billion a year on the ensuing wars alone, which doesn’t include money spent on domestic antiterrorism efforts, like the TSA, and other intelligence and counterterrorism efforts.  In contrast, car crashes claim the lives of 40,000 people in the US every year.  In the US it estimated that 577,190 people will die from cancer in 2012, yet the government spends a paltry $4.9 billion a year on cancer research.

I am not belittling the horror of those heinous acts by any means, but why are we spending 95% less money on attacking something that is responsible for killing 194 times more citizens in this year alone?  Why are we entreated to endless news coverage of the trial of the man who allegedly murdered 12 people during a showing of a popular movie, yet something positive, like the Olympics that highlights the dedication and efforts of various nations, can barely receive a few hours of programming a night?  Because fear and outrage sell.

As a society many people are afraid to leave their country because of situations like when the news reported 1 tourist was shot outside a hotel in a popular Mexican tourist destination (without telling us any of the back story).  Cruise ships even cancelled that port of call for the rest of the season! If one adds up all the time I’ve spent in Mexico over the years, I’ve lived here for over a year.  During that time I have felt safer here than I have in many places I’ve lived and visited in the US.

For eight months we lived on a small island in a country that has the unfortunate claim to having 3 of its cities listed on a “top 10 most dangerous cities of the world” list.  When Tigger got sick and vomited on his way to the store, three men escorted him back home and were prepared to find where I was on the island (thankfully I was in the house).  In our old home there was no way I’d let him walk to the store by himself, and we lived in a safe, yuppyish neighborhood!

The culture of fear has become so pervasive that earlier this year a woman in the US was facing jail time for having her 10-year-old son walk to school.  She was charged with endangerment because “The child could have been injured, abducted.”  When I was a child MANY years ago, we were cautioned extensively to never talk to strangers because they might kidnap us.  True, that could happen.  However, only 24% of child abductions are committed by strangers.  So really, if we’re going to be honest, we need to fear people we know much more.  Relatives are the worst (49%).  But for some reason we don’t admonish our children to watch out for Uncle Bob!  (My apologies if your Uncle Bob merits caution, however.)

For many years I was terrified to let the kids I was taking care of go inside a public bathroom by themselves because, you know, what if there are perverts in there.  Again, the vast majority of sexual abuses are perpetrated by family members or people known to the child.  If we consider the above statistics along with the fact that 93% of all reported cases of child molestation are committed by heterosexual, married men, your child is also statistically much safer with gay Scoutmaster Dave than with Uncle Bob (again, my apologies to Uncle Bob, or nonoffending, hetero Scoutmaster Dave).  In the States, I’m afraid to help or approach a crying child out of fear that I’ll be accused of having some nefarious purpose.

I’m not saying don’t be cautious, but let’s not be so damn afraid either!  Frankly, I would love to see the era of the culture of fear die.  In our almost 1-1/2 years of family travel, and my many years of solo travel before that, I have encountered an amazing number of truly fabulous, giving, and amazing people.  On the steamy streets of Havana, a man guided us for blocks to help me find water for Tigger.  He stopped when he saw a man sitting outside his apartment and told him “the boy needs water.”  The kindly gentleman jumped up, went inside, and brought my son a glass of water and had a bottle in his hand to give him more if he wanted.  When buying food outside a family’s home, we were ushered into their humble living room so that Tigger could sit down to eat his meal.  The family told us to come back any time we needed anything.  Cuba has a unique culture when it comes to children.  Here, a 6-year-old girl (or even a 20-something) can walk alone down a seedy-looking street at 10 PM and have no fear.

There is a difference between living in fear and having common sense.  When we’re in a new area, Tigger is my shadow until I get a feel for things. I don’t carry my expensive camera into an area until I’ve had a chance to check it out first.  Instead, I keep a cheap point-and-shoot in my pocket.  I don’t carry around wads of cash, but I do trust my gut.  When I’m in an area that is less safe, I can feel it.  I know how to carry myself so that when I’m walking down the street I’m sending the message “Trust me, it ain’t worth it.”  Yeah, I’m a big guy, and I know how to use “the look,” but I think the biggest thing is I’m not afraid.  I’ve learned there is far more good in the world than bad, and I also know we attract what we give the most thought and effort.  So instead of walking around fearful that every corner hides a potential attacker, I choose to focus on how safe we are, how good people are, and what a beautiful night it is.

What can I do?

Start with the little things.  First, don’t help the fear peddlers with their sales.  Sure, be informed but don’t flood your life with anxiety-provoking information.  It is so easy to get overwhelmed.  If you tried to protect yourself from everything that can hurt or kill you, or even try to catalog all potential dangers, you’d never leave the house.  Although, did you know that most accidental deaths occur in one’s own home?  Statistically, you’re safer leaving the house, and going more than a few blocks.

Instead of focusing on all the evil in the world, consciously seek out all of its tremendous beauty and good.  Let little Suzie climb those boulders, and maybe Billy doesn’t have to be as padded as the Michelin Tires Man when he gets on his bicycle.

And maybe, just maybe, it’s time to take that dream vacation to the white sand beaches of the Mexican Caribbean, to see Paris from the top of the Eiffel Tower after all, or to go white-water rafting in Honduras.

Break the chains of the culture of fear and enjoy life!