What I want to leave my son

Home » Musings » What I want to leave my son

Even though I’m all about living in the moment, sometimes it’s hard to avoid thinking about your child’s future. The other day I was alone as I walked the streets of Paris at night. Long walks are always a great time for pondering things, and this time I was considering the question—What legacy do I want to leave my son? 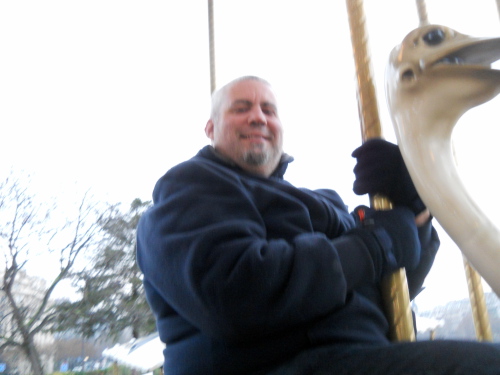 Tigger snapped this of me on the carousel

I want to leave my son with the belief that age is really a useless number (except where it involves legal requirements). In my mid-40s, I still have childlike glee when it comes to riding the carousel and wanting to explore. I hope Tigger never falls into the trap of acting one’s age. One can have maturity without becoming a stale, boring adult.

Prior to his 11th birthday, he rejected my plan to get him a piñata for his party and wasn’t sure he wasn’t too old for a party. My response was simple, “For my 50th birthday, I want a piñata! Fill it with good chocolates, small bottles of booze, and Jelly Belly candies.” You’re never too old for a party or a piñata. Or for a carousel ride.

I hope he doesn’t fall into the trap of doing what he thinks people expect just because of his age.

I often hear him express being concerned what someone will think. I have spent most of my life living for other people. My maternal family was possessed with this same concern. I don’t want my son growing up with that. I want him to live for himself, to dress how he wants, to play how he wants, to be what and who he wants regardless of what others may think. “If you’re a good person, have integrity, and are happy, that’s all I want,” I often tell him when he asks what I want him to be when he grows up.

He’s considering becoming a surfing instructor when he’s an adult. Or maybe he’ll do YouTube videos. I have a bachelor’s, master’s, and doctorate degree with post-doctorate education. I don’t want that for him. Unless he wants it. It took me most of my life to decide to find my passions and make those my “work.”

I’ve told him before: If you find out that flipping burgers is something you’re passionate about, and it fills you with excitement to get out of the bed and go flip burgers, then be the best damned burger flipper you can be. Are you happy? Then I’m happy.

I hope I have demonstrated qualities he chooses to emulate, but in the end it’s more important to me that he is himself and not just a carbon copy of me and my values and beliefs.

Lots of things are scary. Don’t give them power to control your life, though. Don’t miss out on opportunities or let dreams die just because they’re scary. 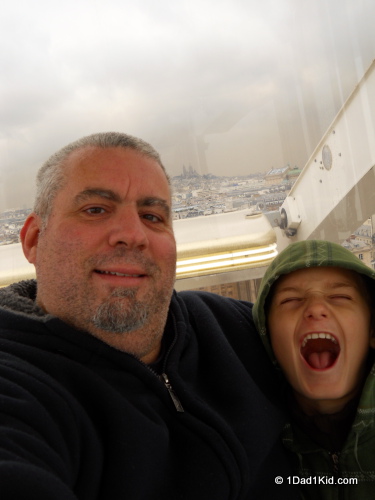 I am terrified of falling, but we rode this ferris wheel in Paris anyway.

When I was younger, I wanted to become a veterinarian, but I was turned away from it because “It’s hard to get into school. You have to have either lots of money or you need to know somebody.” Later when I discovered the healing power of art, I decided I wanted to become an art teacher to bring that to others. “But, how will you support a family? There’s no money in that.” Instead, I pursued the traditional academic, lifelong career, pursue-the-American-dream belief. I had even been accepted into an art program but turned it down because I was swayed.

Take your passion and make it happen. . . Thanks, Flashdance! You got that right!

I don’t want that for my son. Unless that’s what he wants. Instead I want him to live our family motto of Live without regrets! and my personal tagline of “Chase down your dreams and make them your bitch.” I’d rather he is barely scraping by financially but deliriously happy with his life than working in a job he can’t stand just to live in a big home, have a nice car, etc., because that’s what society thinks is best. Screw that! It’s YOUR life, Tigger. You are an amazing, wonderful person. Never lose that regardless of what ANYONE says.

We are the music-makers, and we are the dreamers of dreams…

We are the music-makers,
And we are the dreamers of dreams,
Wandering by lone sea-breakers,
And sitting by desolate streams.
World-losers and world-forsakers,
Upon whom the pale moon gleams;
Yet we are the movers and shakers,
Of the world forever, it seems.

With wonderful deathless ditties
We build up the world’s great cities,
And out of a fabulous story
We fashion an empire’s glory:
One man with a dream, at pleasure,
Shall go forth and conquer a crown;
And three with a new song’s measure
Can trample an empire down.

We, in the ages lying
In the buried past of the earth,
Built Nineveh with our sighing,
And Babel itself with our mirth;
And o’erthrew them with prophesying
To the old of the new world’s worth;
For each age is a dream that is dying,
Or one that is coming to birth.
—Arthur William Edgar O’Shaughnessy 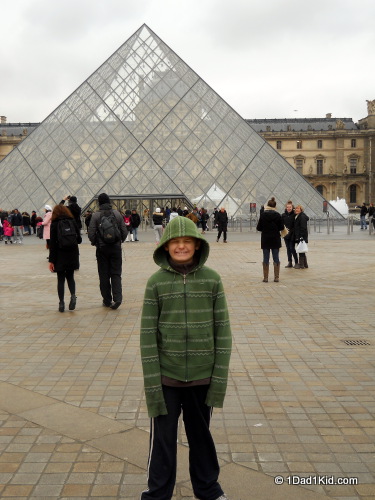 As our blog tagline says, I’m giving him the world. Not only am I showing it to him, but I’m hoping he absorbs it as well. I hope he pulls into his personal life all the best values and cultural practices that he experiences. I hope he sees himself as a citizen of the world rather than merely a citizen of whatever country issued his passport.

I hope he sees that no one country or culture has all the right answers, but that there is beauty, value, and wonder everywhere, and that people throughout the world are mostly good, kind, and generous. There are stinkers everywhere, but for the most part the world is full of fabulous people.

I want him to have faith in himself first and foremost, no matter which way his spirituality leans. In his times of challenge, I want him to have faith that nothing can undue or overcome the love, respect, and admiration I have for him. May that pierce through his darkest, weakest moments and be a beacon to guide him through any storm until he can find his own feet again.

To be strong in the face of adversity, to hold to his personal values even when hope is elusive, to stand against injustice, and to do what is right when that is the hardest decision one can make. To be able to show emotion and be present to his feelings and not buy into the machismo crap that says boys and men don’t cry. It takes true strength to be able to cry and not run away from your emotions..

To see others and let their actions detail who they are rather than their socioeconomic status, their race, appearance, age, gender, religion, or anything else. To believe that all people deserve the same rights.

The world and life are full of magic. Too many people lose sight of that. Every sunset and every sunrise is a miracle. I hope he never stops to wonder at the magnificence that surrounds us all everywhere we go. I agree with Harry Potter’s Dumbledore, love is the strongest magic there is. May his life be full of it, and may he be the mirror that reflects that to all he meets.

The most important gift

Mostly, the most valuable legacy I believe I can leave my child is to know deep down to his core that he is loved and that I believe in him no matter what.

That’s a legacy that even death can’t take away.

What legacy do you wish to leave your children or loved ones?