The Perhentian Islands are a highly sought after place to visit both as a tropical island getaway as well as for scuba diving. Are they worth the effort to go there? 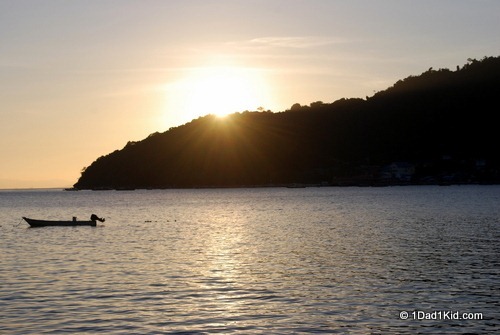 Ever since I had read about these islands during my days as a novice diver, I have wanted to go there. The Perhentian Islands had been ranked highly for scuba diving. When I was discussing our upcoming visit with the Bohemian Travelers clan in Penang, Malaysia, I had mentioned doing her eldest son’s scuba certification for his 14th birthday. I also convinced her to join him. Penang is not an ideal place for diving, so we discussed the Perhentians, and a plan was hatched.

After finishing the confined portion of their dive training in an incredible pool, they were even more excited about the idea. I could barely wait for the day to arrive! We rented a car since it would end up being cheaper, and a lot easier, than taking a bus.

The ride from the mainland to the islands was rather interesting and, thankfully, easier then the crossing we used to take between Utila and the mainland. Although it was quite a bit more bumpy, and I was relieved that my back didn’t decide to start giving me problems after the journey.

My initial impression of the Perhentians was. . . well, meh. 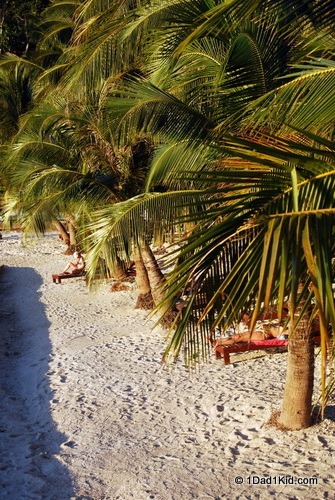 We’ve lived on plenty of islands throughout the world. Perhaps we’ve become spoiled by it, but to say I was underwhelmed by these islands would be putting it nicely. But, there was diving to be done, so that was promising. And at least our room had air conditioning.

My first introduction to diving on the Perhentians came with our water taxi ride further down the island where the dive center was. That seemed kind of cool, an extra fun piece to the adventure. Until we arrived at the dive shop where we discovered we would have to get out of the boat and walk over a large section of dead coral.

Not knowing this ahead of time, none of us had reef shoes. I swore silently as I carefully walked over the sharp coral hoping I wouldn’t end up with a deep gash in my foot.

We got our equipment together while we waited to find out where we were going. That’s when we discovered we would get to walk back over those same sharp objects while carrying all of our gear, including the heavy tanks. My swearing was about to become less silent.

We boarded the boat, which was no small effort, and headed to our first site. I was so excited to introduce my friends to the underwater world! Tigger snorkeled above while we descended and began our dive. Which is when my heart fell a little.

The coral was very unhealthy and quite probably overdove. We did get to see lots of clownfish, some of which were quite tiny, but apart from them and the overprotective damselfish, the Chihuahuas of the ocean, we didn’t see much interesting sea life.

I was so disappointed! I wanted to wow them! Especially Mary because, well, certain aspects of the training required a lot more . . . effort from both of us. I wanted her to be so amazed that she felt like it had all been worth it. Maybe on the 2nd dive.

We returned to the dive center where I discovered this outfit has an unusual scheduling method. We had to sit around for almost 2 hours until our second dive! The kids took it in stride, and after lunch they went snorkeling.

Walking back to the shop from the boat proved to be even more dangerous in the afternoons when there were other boats anchored in the same area. You often had little room to move around their lines, and twice I almost stepped on the sharp end of an anchor while I stumbled over the coral and rocks.

Our 2nd day of diving wasn’t much better, except this time we knew we’d have a long wait between dives. And, actually, their last dive had some of the worst visibility I’ve been in. (We were there at the tail of the monsoon season up north, and this could have affected visibility.) It was good enough for us to finish the dive, but, once again, there just wasn’t much beyond the occasional sea cucumber and clownfish.

I was so disappointed for them. In spite of it, though, they’re still addicted to scuba.

The rest of our stay in the Perhentians just didn’t do much to change my mind. There was a pretty sunset, but I’ve seen better. 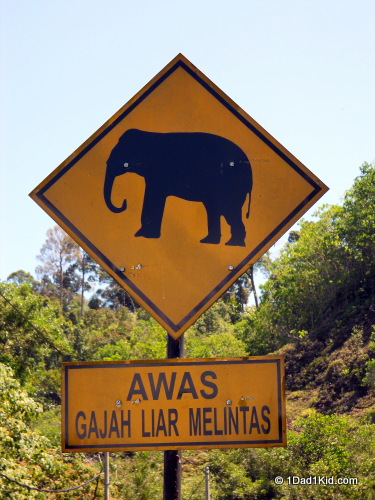 On the way back to Penang, we did get a highly unusual treat, though. We had seen the wild elephant crossing signs plenty of times but hadn’t seen any elephants. As we got closer to our turnoff, though, Mary spotted some! We were all jumping in our seats. 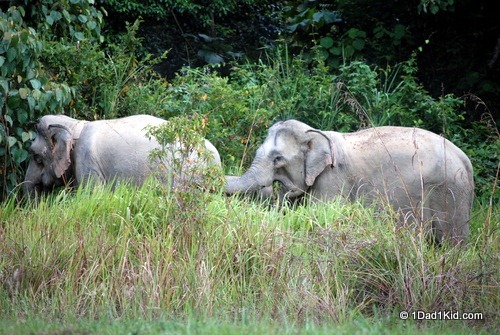 We got a little adrenaline rush when my friend apparently got a little too close for the bull’s comfort, and he began a charge. I was honestly surprised my body could move that fast!

He stopped as soon as we jumped back into the car and stood there with his ears unfolded, waving his head from side to side. Once he was assured we knew our place, the cow and young elephant came back out from the bushes, and we enjoyed some more time watching them.

What a way to end a trip!

There are much better islands to visit while in Malaysia. Aim for Redang if you still want to be in this region. It’s far less touristed, and the reef is in better shape.

If you do go to the Perhentian Islands, I can’t recommend spending the money to dive there. There are much better spots in Malaysia and nearby Thailand and Indonesia. And if you do go, I’d suggest diving with one of the operations that uses an actual dock.