After a few weeks in Vietnam, and even longer away from the water’s edge, Tigger and me decided we needed a beach break. I hadn’t heard many people talk about Nha Trang (pronounced like nah-chang), but our friend in Dalat really enjoyed it. We were due in Saigon soon, and since it was possible to take the overnight train from Nha Trang to Saigon, it was settled.

Our landlady made a phone reservation for us for the bus. They have a pretty cool system where a minivan picks you up and takes you the bus station. It’s included in your bus fare. Not too shabby! We were able to get our train tickets booked online, and the tickets were to be delivered to our hotel and would be waiting for us when we checked in. Here are some different ways how to get to Nha Trang.

Several hours after leaving Dalat, a rather interesting drive, especially if you’re crazy enough to look out your window during the windy mountain pass portion of the trip, we stepped off the air-conditioned bus into hot, take-away-your-breath humid air.

We stayed at the Golden Lotus Hotel on the recommendation of our friend. I went ahead and splurged a bit so we could have an oceanview room. Our beds faced the big glass sliding door so that we could relax in our beds and stare out at the beautiful sea while enjoying the air-conditioned chill of our room.

It’s a hard life, but someone has to live it.

Interestingly, the area is a hotspot for Russian tourists, and you’ll find signs in Russian everywhere. I had a few people come up to me speaking Russian, which is not one of my languages. I just smiled and replied “English?” and they walked away.

In addition to beach time, we had heard about an amusement park on its own island—Vinpearl Land. They were kind enough to sponsor us, and I’d say coming here is a must-do in Nha Trang. Your admission ticket includes transportation to and from the island. You can arrive and depart by either ferry, slow boat, or by taking the world’s longest sea-crossing cable car system.

In spite of my little issue with being afraid of falling, I opted for the cable car, and surprisingly was never panicky during the ride. We came back at nighttime, and the pillars that hold up the system are lit up and look like miniature Eiffel Towers.

The island boasts amusement rides, a beach, water park with an impressive wade pool, video arcade (and all the games and rides are free), Vietnam’s largest aquarium, 4D movie theater, and a 5000-seat outdoor ampitheater.

I was pleasantly surprised to see that the restaurants were reasonably priced, comparable to other restaurants on the mainland. There was a great selection of Western and Vietnamese food. They offer both casual and fast food dining. We ate dinner at one of the restaurants which was next to the ocean. It made for a perfect end to the day.

If you’re looking for a different kind of lodging experience in Nha Trang, there is also a resort on the island. We didn’t check that out, though.

The park was tons of fun, and we ended up spending the entire day there.

It had been a while since we had been diving, and our gills were really dried out. We checked out several centers in town. The only one that impressed me was Sailing Club Divers. We paid about $45 USD per person (I was given a professional discount because I’m an instructor) for 2 dives, and the fee included all the gear, pickup and drop off from the hotel, transportation to the marina, marine park fees, and lunch.

I was very impressed with their boat. It was probably the most comfortable diving boat I’ve been on. Staff were very professional, equipment was in good condition, and the lunch was pretty good. I also really liked that they had small group sizes. I think the largest group any divemaster had was 3 people. Divemasters gave a great briefing and had good diving practices during the dives, i.e., weren’t damaging the coral or harassing the marine life. 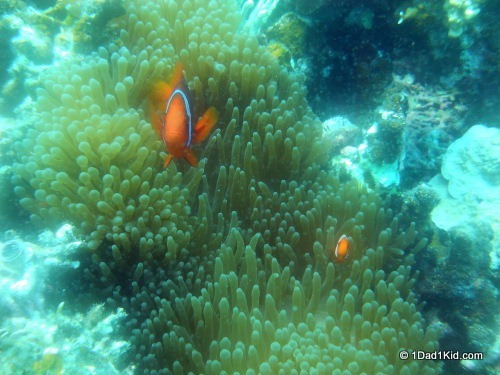 My whole diving career thus far has been Caribbean diving. Vietnam was pretty similar in terms of coral, but we did get to see a lot of fish I hadn’t seen before, including my first wild cuttlefish and plenty of nudibranches.

I initially made fun of the people donning wetsuits, but I discovered what the DMs already knew—they have lots of thermoclines. One minute you’re in bathtub 29-degree water (Celsius) and the next you’re almost shivering in 26 degrees. It just made you appreciate those warm currents even more. 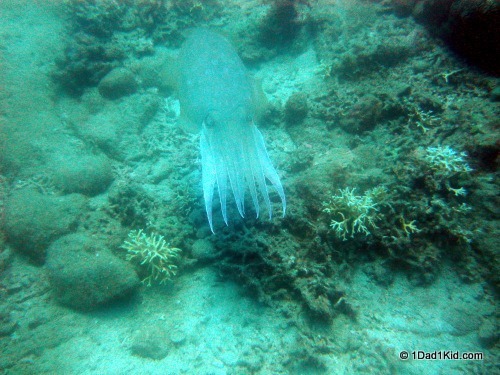 This is a very touristy town,including Vietnamese and Chinese tourists. Many of the restaurants are priced accordingly. However, we found that taking the side streets and walking just a few blocks away from the main drag brought us to the places the locals eat. The food was outstanding and inexpensive. 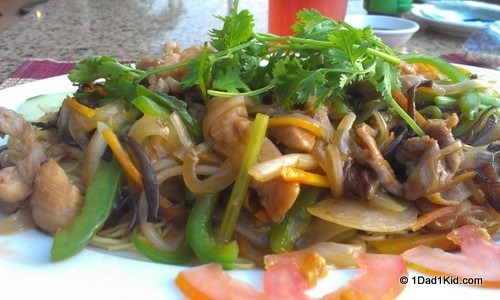 One of our favorite lunch places didn’t have a name. Walk past the KFC and the street where Rainbow Divers is located, and you’ll find it on the corner. They have a fruit stand in front. They are so unaccustomed to non-Asian tourists that they kind of huddled around us while we ate and peppered us with questions. They marveled that I was eating with the chopstick/utensil combination that is common when eating noodle soups. They warned me when they saw me shovel peppers into my food. “That very hot!”

They watched unconvinced as I ate some of the spicy food. When I didn’t explode, they all let out their breath and laughed.

We also bought some mangosteens from their little stand. They were quite good.

On your way to this eatery, you will have no doubt noticed that you passed a place called Romy’s Italian Ice Cream. You will want to have dessert here. The gelato was some of the best I’ve had.

Near our hotel is an Indian and pizza restaurant (yes, seriously), and the food is pretty decent. It’s called Omar’s. If you’re dying to have some Indian, it’s a good place. Don’t expect super food, but it helps take care of the craving. The pizza was also fairly good.

I would not recommend Salina Restaurant. They supposedly have draft German beer, but it was total crap. The food wasn’t much better and was way overpriced.

They have everything else you could possibly want for fun in the water: Kitesurfing, wakeboarding, jet skis, you name it. The beach is really clean and practically abandoned during the day. It seems that most Vietnamese beachgoers only head out around 4 PM when the sun is lower in the sky.

It is very touristy, but Nha Trang is still a fun place to visit for a few days, especially if you’re interested in any of the above.