In the last week we’ve attended 3 birthday parties, 2 of which were for kids. One was a local friend and the other some visitors from America. I’ve always loved that in Spanish, particularly the Mexican form, there are 2 words for “party.” One, fiesta, is your average, run-of-the-mill celebration that will only last probably 2-3 hours and won’t get too crazy or too exciting. The other is pachanga. Basically you have a party or you have a PARTAY! In my general experience Latinos typically PARTAY, and it’s one of the many things I love about the culture.  It might be hard to imagine a PARTAY for a child’s birthday, but it can happen.

When we went to the two birthday pachangas, nothing seemed unusual to me, and I enjoyed the life and energy that accompany these types of events, but yesterday we attended the celebration for some American visitors to the island. I didn’t even think about the differences until we arrived and was immediately struck by the severe sedate blandness by comparison. I kept the smile plastered to my face like you’re supposed to and dutifully applauded softly when the little girl blew out her sad, solitary candle., but secretly I wanted her to discover the Mexican tradition.  You see in Mexico you don’t just make a wish and blow out the candle(s). Oh no. After you’re sung to, as you’re surrounded by loving friends and family, you blow the candle out and someone joyfully smashes your face into the cake.  A kid’s face is smaller, so usually you don’t need 2 cakes for this. Everyone knows it’s coming, but the victim always manages to act shocked when it happens. The adult one can get even more fun when the birthday boy or girl decides that other people’s faces need to be properly decorated by a mix of cake and frosting as well. We saw this as Tigger had his first empanada in the mercado during our 1st week here. I loved that even in a “work place” coworkers were getting plastered with birthday cake in the walkway.

Piñatas here are not for the faint-hearted either.  I watched a line of about 15 kids whack the hell out of one the other day.  Each child took at least 3 turns before the thing even gave a hint of weakness.  Finally some big, burly men  joined in and blushed mightily as their best efforts proved meaningless to the papier mache structure. Piñatas made in Mexico make sure you’ve earned that candy, let me tell you!  Our American party hosts did their best, but where was the singing that accompanies each person’s turn at getting out their pent-up frustrations on a strung-up candy container? They had never heard of the song (okay, I hadn’t known about that either until our birthday party the other day), and this was their first time doing or even seeing a piñata, which really surprised me since they live in Texas.  Tigger and I tried to pass on some of the local fun traditions, but they weren’t all that interested and the piñata finally suffered its annihilation as bored children grabbed it and manually ripped it apart (after some seriously great effort, too).  Afterward adults sat around in quiet mundane discussion over cocktails while the children ran around and played.  This wasn’t even close to a fiesta much less a pachanga!  I wanted the smell of corn tortillas being heated on the grill, the loud boisterous stories being told all around me, and for heaven’s sake I wanted to see a face get smashed into a cake! 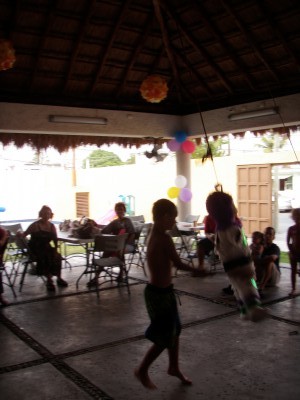 It was interesting seeing 2 different worlds so vividly highlighted back to back like this. I’m especially glad Tigger got to experience it. And my suspicion was confirmed.  He’s definitely more of a pachanga-type person. Just like his dad.

P.S.  Yeah, the pic isn’t the greatest quality but sometimes you gotta go with what you got, right?