Tunisia is one of the best places in Africa to go on holidays. Whether alone, with your other half, or your family, everyone can find something to enjoy in Tunisia. Despite what you might have heard, the country isn’t dangerous and most people don’t get sick after trying the local cuisine.

However, you’re probably wondering, what’s so special about Tunisia? 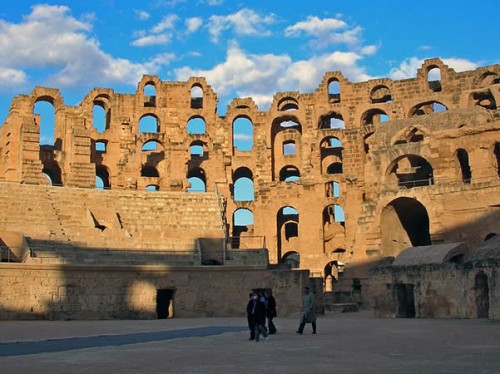 No matter which place you choose to visit in Tunisia: the famous Hammamet, Sousse or Monastir, you’ll be amazed by the standard of your accommodation and the friendliness of the staff. Once you settle in your room you can hang out at the pool or walk to a beautiful beach and meet some local camels hanging out. I would definitely recommend parachuting and jet-skiing, both of which are available at almost every beach in Tunisia. The wealth of marine life, particularly in Hammamet area, makes Tunisian beaches particularly popular among scuba divers.

Tunisia offers a wide range of dishes which are heavily influenced by Arabic, Mediterranean and French cuisines. Similar Moroccan cuisine, Tunisian meals are rich in spices such as coriander, cumin, saffron and harissa. Slow-cooked meats and couscous with eggs are commonly found in Tunisian dishes. Purchasing alcohol is not difficult as it is in most Muslim countries, but be careful—Tunisian alcohol is most likely far behind your favorite specialty.

The country offers plenty of historical sites such as Tunis and Sma. However, to my surprise, this ancient city turned out to be a tourist trap full of souvenir shops and kids trying to sell you anything they can. I would rather recommend spending more time at the small village of El Djem, located 20 minutes away from Sousse, to see the impressive ruins of the largest Roman amphitheater in Africa. It’s a fantastic opportunity for those interested in seeing ancient Roman ruins without the tourists. When in Tunisia, one cannot miss an excursion to the Sahara, which in my opinion is the best trip in Northern Africa. There are a variety of places where individuals can purchase a tour or take day trips to the side of Sahara. The first stop is usually Tozeur, Sahara’s gateway, where you quickly end up on a donkey and are taken to a spectacular oasis. There is always a local guy climbing a palm within 30 seconds, some young kids jumping from the cliff, and others trying to sell you tea in any language you want to hear. If you’re really determined, you can spot the Algerian border from the top of a rock you can reach by sneaking through the tunnels.

The Tunisian part of the Sahara features Matmata, a local village where Star Wars was filmed. You can get there via desert jeeps that drop you off at the site and pick you up 15 minutes later to drive you through part of the Paris-Dakar rally race course. If you’re scared of roller coasters then you should probably skip this activity, because it includes plenty of jumping on the dunes. After the drive, you’ll visit Ong Jemal, the neck of the camel rock where you are greeted by real camels which you ride to the scenic part of Sahara.

Most travelers are more than satisfied with a sunset ride on a camel and they pass out in the tent. However, if they get ready to wake up at 3:30 am, they are treated to the best sunrise that one can watch from the desert. Even though it’s quite crowded it’s still worth seeing. Tunisia is a special place.

Anna Lysakowska is a blogger at Anna Everywhere and editor at Flipit. She has visited more than 45 countries and lived in 7 cities, including Mexico City, Boston, London, Cape Town, Florence and Amsterdam. She studied journalism at Harvard, international law at Oxford Brookes, and obtained her Masters in Latin American Studies from Leiden University. Since 2013, she has been residing in the Netherlands where she works at a marketing company, but this doesn’t stop her from traveling.