Spending Time with the David Statue

The David statue is well known worldwide. Historically, Florence has a special connection with the biblical tale of David and Goliath. Fighting against Rome and other enemies had made them develop an affinity for the ancient tale. They could relate to being the “little guy” in a battle yet overcoming against great odds. 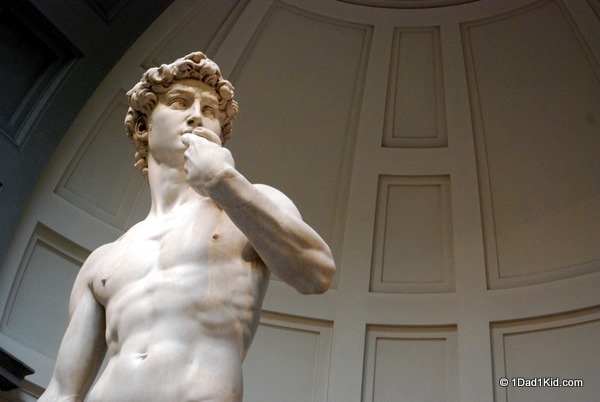 I related to the statue on a different level. As a young child, I spent a lot of time in my grandparents’ apartment. My grandmother enjoyed art, and among her copies of famous paintings like the Mona Lisa and The Blue Boy, she had a bust of David. I remember spending a long time during every visit admiring at the sculpted details of his curly hair and fascinating eyes.

Nearby on a shelf with other curios, like her babushka dolls, stood a small copy of the David statue. I was fascinated by his chiseled chest and abs. Looking back, perhaps that was a bit of a clue that I was gay.

We were going to Florence, and the David was on my list. We only had a few days to spend in Florence, and I wanted to maximize our time. In Rome, we had done an excellent “best of” tour with Walks of Italy, so I contacted them again. They invited us to take part in their Best of Florence tour, which includes David, as their guests.

When we got to the building that now houses the original statue (he used to be kept outdoors, and you can find plenty of copies around Florence), I was thankful for their skip-the-line access. I was also a bit nervous thinking that if the crowds to see David were as bad as the ones for the Mona Lisa in the Louvre, we’d be lucky to get close enough to see him.

Then we walked into the gallery, and I was blown away. For some reason I was unaware that the statue is 17 feet tall! And since he’s standing on a high pedestal, you can easily see him from even at the end of the hallway. Thankfully, you can get right next to him to admire Michelangelo’s skill, though. 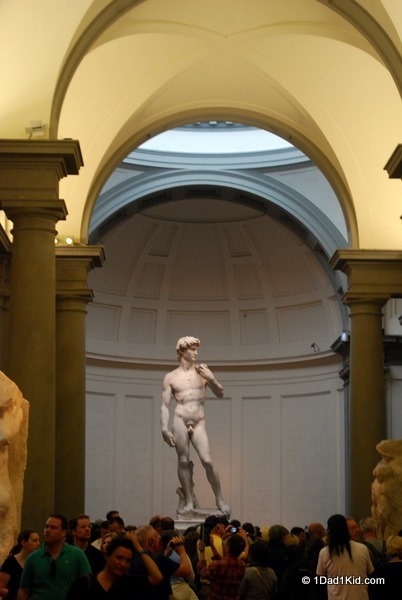 Our guide was invaluable at this point. I had never paid attention to some of the small details the famed sculptor had included. For instance, on the right side of his neck you see the vein is engorged. Michelangelo was a student of anatomy, and he included this as a sign that David was ready for action. The sling rests on his shoulder while he holds the stone in the pouch in preparation for launching. He gazes off to his left, which is where all things “bad” are usually located during this time period.

If you look at his left foot, you can see that his toes are gripping the stone beneath. 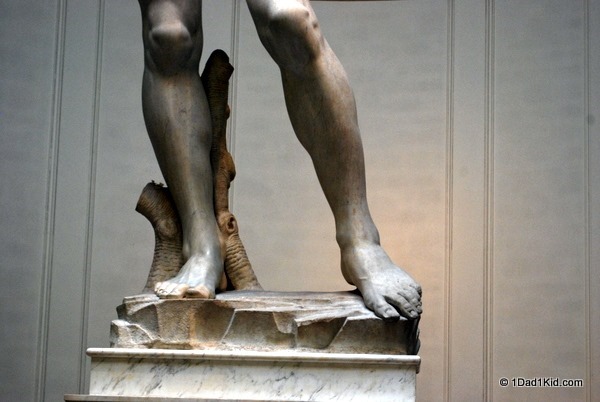 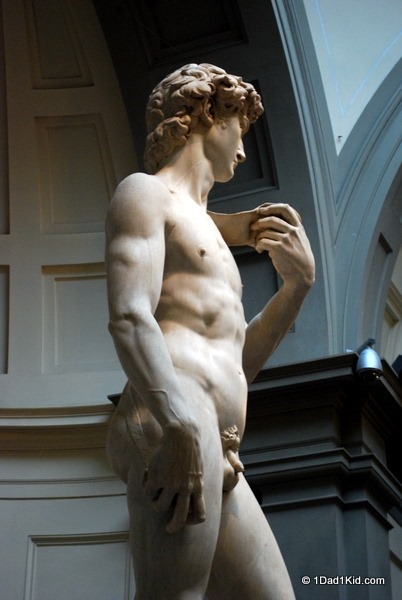 You see the David statue from a completely different point of view when you realize that this pose is actually immediately prior to him striking down Goliath. He appears to be relaxed, but in reality he is seconds away from delivering the killing blow.

David’s hands were made larger than normal because it was theorized a killer’s hands wouldn’t be small.

Something else I hadn’t realized before is that Michelangelo chose to leave David uncircumcised, something that would not have been the case as all Jews were circumcised. This was apparently his way of helping his fellow Florentines see themselves in David. He wanted to accentuate that David was an “every day person.” 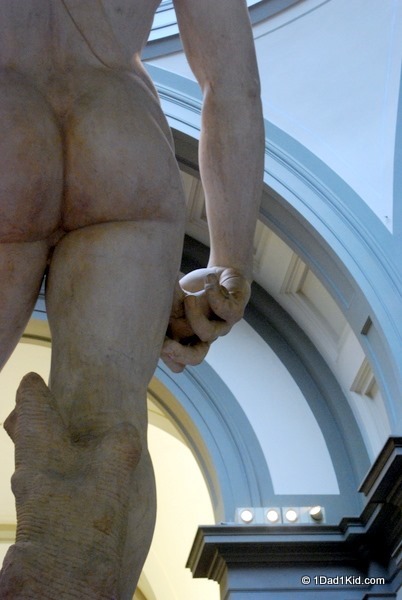 Originally, the statue was intended to be on top of the cathedral. It ended up in front of city hall instead. During one of the battles, invaders threw furniture out windows. One of the projectiles struck David’s arm and broke it off. The arm’s destruction was spared when it fell upon a man standing below. If you look closely at his left hand, you can see the scar from where the appendage was repaired.

While I think it’s better to visit the David with a guide, you can visit him on your own at the Accademia Gallery. There are also some other noteworthy works of arts there, including the final works of Michelangelo which remain unfinished.

No matter how you visit, make sure to go see the David statue in person. It’s truly worth seeing in person.

Have you seen the original David? What was your first impression?