Three islands make up the Bay Islands of Honduras:  Roatan, Utila, and Guanaja, with the latter being the most undeveloped.  The other islands are like comparing apples and oranges, so how do you know which one to visit?  Let me break them down for you.

Roatan is a very popular tourist destination, and the fact that it has a decent international airport (RTB) doesn’t hurt that at all.  There are direct flights going there from Canada and the US as well as other countries.  In addition, Roatan boasts a fairly busy cruise ship terminal.  It is the largest of the Bay Islands.  There is public transportation as well as a very handy taxi colectivo system.  Taxis are expensive getting from the airport or cruise ship terminal, but otherwise getting around the island can be done for fairly reasonable prices.  If you pick up the free tourist map, they even have the colectivo prices listed which makes things rather nice.

Food, like most things, is more expensive on Roatan, but you will also find a much greater variety than on Utila.  They also boast a couple of grocery stores offering American products like Ben & Jerry’s ice cream, Lindt chocolates, and so on.  If you’re on a short vacation, this probably doesn’t matter to you, but if you’ve been traveling for a long time some Ben & Jerry’s or some good chocolate just hits the right spot.  We also enjoyed the Chinese restaurant near the big, well-stocked grocery store Eldon’s.

Activities are in abundance, especially if you enjoy tourism faves like ziplining, canopy tours, and horseback riding.  Naturally scuba diving is a favorite, and Roatan has a truly awesome shark dive that is quite affordable.  In addition, Roatan is home to one of the very few private submarines in the world.  For a healthy sum of money you can ride in the submarine down to depths of 3000 meters. 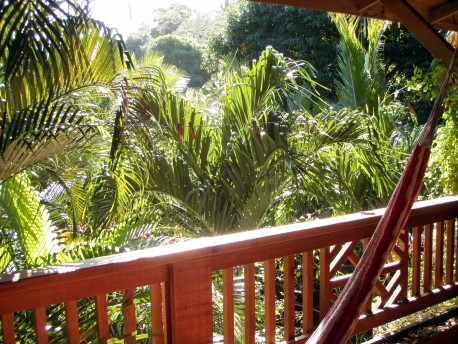 View from our balcony at Casa del Sol

On the flip side, Roatan is tourist central.  Cruise ship passengers are all over the island.  Most restaurant menus don’t even bother listing prices in Honduran lempiras but use US dollars instead.  The wide gap between the poor and the wealthy is a yawning chasm.  A recent visitor to Utila went to Roatan and then immediately came back stating that it reminded her too much of Pensacola, Florida:  “I kept waiting to see my mother come around the corner wearing a sundress.”

Utila is much less developed and smaller.  Here cars are a rarity.  Most traffic is pedestrian, bicycle, or scooters.  There are no McMansions.  While there is a lot of tourism on Utila, it is mostly diving related and tends to attract a MUCH different type of traveler than nearby Roatan.  Utila seems to be content that it has more restaurants than it did a few years ago, and even better that it has 24-hour electricity, but it doesn’t seem to want to be another Roatan or other cruise ship magnet.

You can walk from one end of the town to the other end of the island in about 45 minutes.  If you don’t want to, though, there are some tuk-tuks that will gladly cart you around the island, usually for about $1.50 per person.  Spend any amount of time here, and you’ll quickly know the names of a large amount of the island’s inhabitants, expat and local alike.

While there are some good restaurants here, you won’t find haute cuisine.  You won’t find “good shopping” here either.  In fact it’s pretty darn limited sometimes.  You also won’t find white sandy beaches with attractive Latin Americans bringing you cold drinks as you relax in your chaise.  At least the beer you can buy at the private beach will be cold. 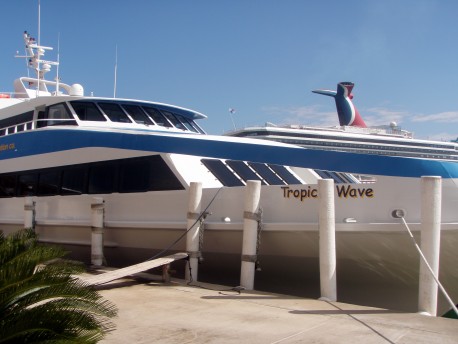 I will give Roatan a slight edge on Utila with its diving, however.  They have stronger currents if you like drift diving.  Because of the regional shark creche, they have a really fun shark dive (just contact any local dive shop and request a reservation).  Their marine preserve is larger, and as the island’s economy is more and more focused on tourism it has helped avoid overfishing of the reefs so that fish are more abundant and larger than at many of Utila’s dive sites.  They have more large wrecks than Utila as well.  I’ll say they win in this category by a very slim margin.

In the end it comes down to what type of travel style you like.  If you want to be in another country but not too far away from the comforts and conveniences of home, like running hot water, then Roatan is your place.  If you prefer a laid back, small island community experience, then you’ll want to come to Utila.  On a tight budget? Utila is your choice again.