Review: How to Live a Life of Travel

Home » Reviews » Review: How to Live a Life of Travel 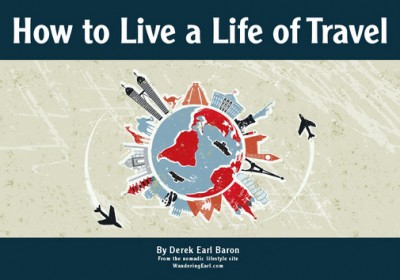 I have been a big fan of Earl’s since I first started preparing for our journey and discovered that he has been traveling for the last 12 years.  Later while in Mexico we had the chance to stay with him and his girlfriend for a few days, to get to know him better, and to learn from him.  I’ve always appreciated his honesty and integrity.  I knew he had a popular ebook about how to find a job with cruise companies, but being a single parent that isn’t a particular route that is open to me at this time.  When I saw that he had a new ebook coming out, however, I was eager to review it.

One thing I have always found refreshing about Earl’s website is that he states he likes to help people, and I’ve certainly witnessed that it’s true.  I’ve also noticed that he provides support to purchasers of his digital projects.  That means if you have a question, need further info, are curious about something, etc., he is only an email away.  Not many authors offer that kind of service.

Two years ago when I was researching how I could possibly make travel our life, I read many books, including some authored by popular travel bloggers.  Unfortunately, I’d have to say the vast majority of them left me, frankly, rather irritated at the lack of truly helpful information they contained.  Some authors, especially ones who are also steady bloggers, seem to get a bunch of quotes from people, arm themselves with a bullet list of ideas readily found on the Net, and then just throw them together in a book with a catchy title but with no true substance.  Knowing Earl’s reputation I hoped for more, and thankfully I was not disappointed.  Rather than just give his readers a list of ideas and leave it at that, he does a great job of telling you the pros and cons AND how to pursue some of those ideas including some helpful resources.

I love the way he handles the topic of finances using pad Thai currency (“$4 cup of coffee = 9 plates of pad Thai or 7 nights in Bangladesh”).  I don’t use the pad Thai comparison as my “is it worth it?” figure, but he goes on to show you several different comparison ideas that really help put into focus what the real cost of something could translate into were you investing that amount into travel instead.  Throughout the book he continues to address the various aspects of finances.  He started his adventure with $1,500.  As I noted above, he’s been traveling for 12 years continuously.  Think perhaps he has some ideas?

He really has included everything in this book.  His section on planning covers things you might not consider, tips on accommodations, including his process for getting an apartment for much less than the asking amount, etc., even a nice little breakdown of areas to help you figure out which country you’d like to begin with.  He goes on to give you several ideas of ways you can earn money while on the road to support your new lifestyle, but here again he doesn’t just give you ideas, he tells you how to get started in many of them and then lists additional resources.  An extra nice touch is his advice for breaking the news to family and friends, and how to deal with the possible aftermath.

I can’t say that I’ve read many books on long-term travel, traditionally printed or as digital products, that I felt comfortable recommending, but Earl has put out a product that I can recommend wholeheartedly and without reservation.  If you’re considering long-term or extended travel, How to Live a Life of Travel is completely worth the purchase price and will probably be a book you turn to often as a resource.