Our latest adventure in Thailand 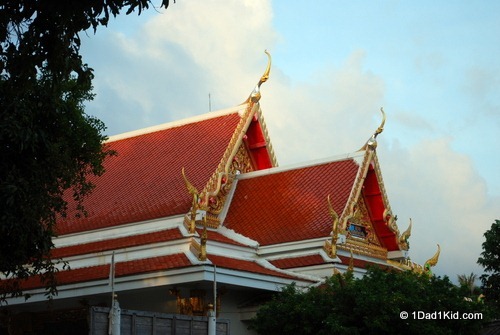 I stood outside a rather official-looking building. The yellow flags of the Thai royal family stirred in the slight breeze generated by nearby traffic roaring down the street. A 5-story mural of the king adorned the modern building’s facade. I wiped my eyes of the sweat that was causing them to burn as the few security officers in the guard post eyed me cautiously. “It’s always an adventure in Thailand,” I thought.

Tigger and I looked quite out of place in this nonpedestrian-friendly area. Not only because we are clearly foreigners, but we also had our light blue suitcases trailing behind us. We both sipped from our Slurpees hoping the frozen treat would somehow provide some internal air conditioning while I tried to spot the seemingly mythical bus station that would take us to Ayutthaya.

Seeing no sign of my own version of the white whale, I headed to the guard booth. I greeted them in Thai and did a wai, the Thai bow. Having realized that I was in a section of Bangkok that didn’t have many English speakers, I made my question simple: “Ayutthaya. Bus?”

A look I’ve seen many times before spread over their face as they nervously looked to their colleagues for support. They had no clue what I was saying. “Ayutthaya?” I repeated.

As I tried to figure out how else to communicate the name of my desired location, finally one of the guards lit up. “AyutthaYA?” he said, accenting the last syllable.

Relieved, I smiled and nodded my head vigorously as I answered, “Chai, krop!” YES! Oh, thank goodness we finally got this far!

But saying yes in Thai was a mistake. Those two words together elicited a long string of rapid Thai. Of course, even if he had spoken only one word a minute it wouldn’t have helped me understand. I shrugged, completely clueless as to what he was saying.

Finally, a bus passed, and I pointed vigorously. That worked. YES! Success! He then proceeded to motion climbing another overpass and heading toward an unseen building in the distance. After giving me directions in Thai for what seemed like 10 minutes, he looked at me and said “Taxi.”

Ah yes. A taxi would be easier I’m sure. Especially since I was now sick and tired of carrying our two suitcases up and down narrow, steep staircases. In fact, between the heat, the long walk, and anything else the thought of climbing that set of stairs almost had me in tears.

“Mai, krop,” I replied, shaking my head. I had been quoted almost $80 for a taxi at the airport. I was not going to do it.

He nodded his head in return, and even though I understand maybe 10 words in Thai, if that, I understood what he was trying to convey: A taxi would be easier, or it would be better to go back toward the airport and get a train. We didn’t want the train because this particular one is not air conditioned, and the idea of being packed into a train car with a bunch of other people and only open windows to refresh us just did not appeal to me.

An observant taxi driver spotted us and stopped. The two security guards went over to him and conversed. “Where you go?” he asked me in what later proved to be the extent of his English repertoire.

“AyutthaYA” I said making sure to pronounce it correctly.

Another round of Thai ensued. It was decided that he would use the meter (Bangkok taxi drivers generally do not want to use the meter and will greatly overcharge you if you don’t demand it) and take us to the bus station. A round of thank-yous and grateful bows ensued as our luggage was placed in the taxi.

As we began the journey to the station, I was lulled by the air conditioning. Exhaustion started to take root just as the taxi driver asked me if I wanted him to take me all the way to the town.

His answer of 1000 baht (about $34) earned an immediate “Chai, krop!” from me. Yes, the bus would be a lot cheaper, but at this point not having to move from the vehicle for a while and getting dropped off in front of the guest house was worth it. 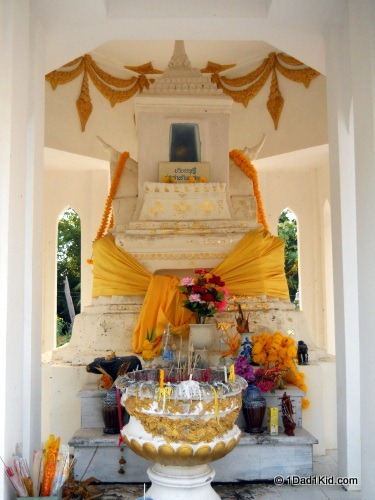 He stopped to refuel and called the guest house for directions. I heard the word for foreigner (farang) repeated a few times before he handed me the phone.

“We closed now. We open next month,” the lady on the other end of the phone informed me.

WHAT! “I already paid! I used Agoda.”

“I don’t know why they do that. We closed until next month. You find other guest house easy. Call Agoda and get money back.”

Luckily my day pack was in my lap which prevented me from striking my head repeatedly against the dashboard of the car.

The driver looked at me sympathetically. “Bangkok?” he asked.

I took a deep breath. I didn’t want to be in Bangkok. I wanted to be in Ayutthaya. I had been looking forward to it ever since we left Thailand a month ago.

I shook my head. “AyutthaYA.”

We drove around looking for places. Neither one of us was very familiar with the town. All I knew from reading was that I wanted to be on the other side of the river. I mimed river, but the up and down motion of my hand was pretty worthless. Finally, I remembered I had an app on my Kindle Fire for Thai. I pulled it out but couldn’t find river. I did, however, find boat and played that for him. Bingo!

Getting over the river still didn’t turn out to be an easy fete. We finally managed to communicate I wanted to be on the other side of the river using the limited words available in the trial version of the app and lots of pointing. After crossing the bridge, we still had difficulty finding a guest house or hotel until he pointed and practically yelled “Farang!”

I looked to see a group of people whiter than me walking across the street. I nodded my head and repeated the same word. White people walking en masse? Must mean a hotel is nearby, right?

And it worked! We ended up in a lovely guest house in a much better location than the placed I had booked. And this one was open.

Sometimes the simple act of arriving is the adventure. And so far, it seems like any time Bangkok is part of the equation, there’s always an adventure in Thailand for me.

Have you ever paid quite a bit extra just to avoid some hassle when traveling?