For those who have never paid a visit to England, they likely think our beaches are nothing but rock-strewn wastelands lashed upon by a frigid sea and shrouded in a cloak of icy mist. Whilst this vision might be true during the winter, we have an abundance of beaches in the U.K. that are delightful in the summer, with golden sand and gentle waves.

When one thinks of a proper beach, though, it’s hard to keep visions of California from one’s mind. Cinema throughout the years coupled with modern pop culture has done much to cement the Sunshine State’s place as the reigning queen of beautiful beaches.

Recently, my husband’s company informed him he’d be travelling to Los Angeles for a series of business meetings over the course of 10 days. I was almost green with envy and informed him if he didn’t take our 6-year-old daughter and me, I would likely die from frustration. After what felt like several hours of fruitless Internet searches, we booked our Los Angeles holiday.

While the entirety of our holiday was brilliant, visiting some of Southern California’s beaches was the real highlight. Here are a few of the beaches we were most besotted with — and, of course, they’re perfect for families. 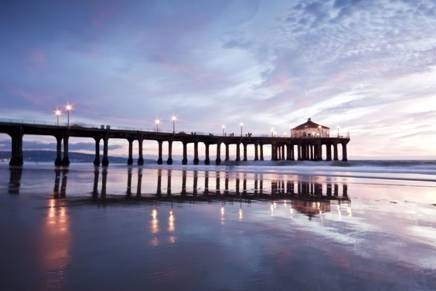 Located southwest of Los Angeles near the community of Torrance is Manhattan Beach. The lovely girl at our hotel suggested we try it, claiming it was great for children. We were more than pleasantly surprised by her recommendation.

This beach stretches for miles in either direction and is covered with soft golden sand. There is an army of volleyball players here at any given time, but there is room for everyone. There is a play area for the wee ones, a cycling trail and bathing areas.

The highlight for our little girl was the picturesque pier and what was at the end of it. The Roundhouse Marine Studies Lab and Aquarium is free to enter, and everyone can have a look at the various marine creatures on display.

If there’s one beach that epitomizes Californian beach culture for me, it’s Venice Beach. I’ve had many dreams about this iconic stretch of coastline and I’d always hoped to visit one day. I’m so pleased I had the opportunity.

Venice Beach is the perfect place if you simply fancy a stroll, people watching and sampling great things to eat. My daughter and I walked up and down the boardwalk, pausing to watch the people on rollerblades and those who were battling the surf. All of this was punctuated with ice cream and American-style hamburgers. It was a lovely day. 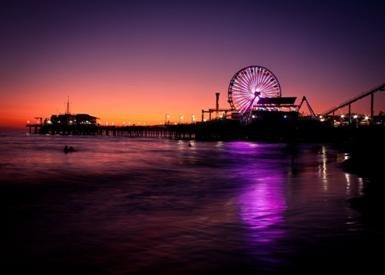 Venice Beach may always scream “California!” to me, but the Santa Monica Pier is right there, screaming alongside it. The sign alone was enough to make to smile.

My daughter was enchanted with the carousel — so much so she barely noticed the beautiful beach and splendid Pacific Ocean right alongside it. We enjoyed the carnival games and rides, and had a wonderful time at the old-fashioned soda fountain.

There are plenty of places for the children to play here, such as climbing structures and gymnastic equipment right on the sand. Bicycles can also be rented here for a relaxing ride along the water. With so much to do, it’s no wonder this beach comes highly recommended.

I hadn’t entertained the thought of visiting a private beach when planning our Los Angeles holiday, but after a few people mentioned Paradise Beach in Malibu, I thought we should investigate it. I couldn’t have been more pleased with our day at this brilliant beach.

Parking here is quite expensive, so we took a taxi instead. The entrance fee per person without parking is $20 USD and while that may seem high, given the available amenities I thought it was more than fair. The beach does charge extra for things like chairs and umbrellas, so it’s best to bring your own. Additionally, if you’d like to rent a cabana at Paradise Cove you can, but the $395 USD price tag may be a deterrent.

The beach itself is lovely, with a protected cove absolutely perfect for swimming. There are several lifeguards on duty at all times, and plenty of places for the little ones to play in the sand. I tried to tell my daughter some famous television shows were filmed here, such as “Baywatch”, but she didn’t care.

When our 10-day holiday was over, we were all quite sad to leave beautiful California. My husband might not have been too terribly sad, having worked through most of the holiday, but leaving sunny Los Angeles and flying back to dreary England felt wrong somehow. I’ll always be grateful, though, we had the chance to experience some of California’s best beaches.