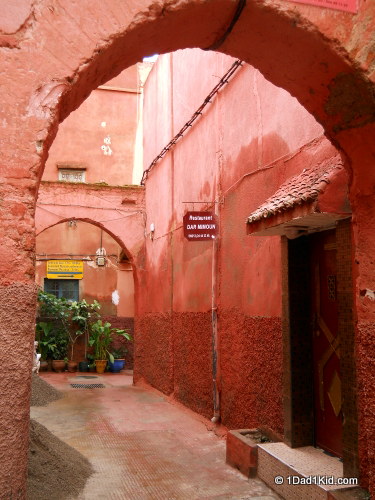 We’ve been in Morocco for close to a week now. So far we’ve been in two larger cities: Tangier and Marrakech. Naturally, people have asked me what my thoughts are on such an exotic place. Normally, asking my thoughts on any given topic could end up with the inquirer getting a lot more information than they hoped. This time. . . my thoughts just aren’t so clear. Morocco is an enigma.

The official languages of Morocco are Arabic and Berber. While French isn’t an official language (I thought it was), it is quite prevalent. Unless you’re in Tangier. Spanish is much more common in this port city. Not surprising given their proximity to Spain.

I speak limited French. Thanks to my fluency with Spanish, though, I can read much more French than I speak. Needless to say, I was quite relieved when I found out Spanish was a strong language in Tangier. Though, it took three languages to buy our train tickets to Marrakech. I’ve nicknamed the process “speaking Franglish” (French, Arabic, Spanish, English).

Tangier was an interesting introduction to Morocco. It’s a city that doesn’t quite seem to know what to do with itself. The people are quite friendly, though. Due to a delay caused by someone not being where they needed to be (not us), we were significantly delayed getting off the boat. By the time we made it out of the station, we either had a very long wait for a bus, or we needed to grab a taxi. The port of Tangier Med (if coming by ferry from Algeciras, Spain) is quite a distance from the city center. Thanks to the kindness of some of the other drivers, we were able to get a taxi for 27€ (all I had on me and no ATMs in sight) instead of the 40 he wanted.

The next day we headed for the train station for our first overnight train journey.  We were headed to Marrakech.  Tangier you can skip, but Marrakech?  You can’t come to Morocco and not visit this city!  Even though it is a major tourism area, you can find affordable and budget friendly hotels quite easily.

I thought Tangier was an enigma.  And then we arrived in Marrakech.  How do you best describe this town?  I’ll give it a try.

And apparently I’m not alone in that assessment.  When I posted something similar on Facebook and Twitter, I immediately got several responses from people who wholeheartedly agreed with that description. 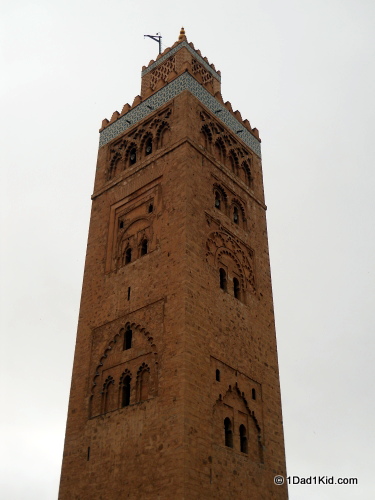 Very few places make you feel like you’re traveling in time, but this city will often keep you guessing.  We stayed in a place in the medina (old, walled part of Marrakech).  The souks (markets) and square were much as you might imagine them.  Your senses are immediately  assaulted by the smells from all sorts of foods, multiple languages being spoken, and your eyes dart in so many directions at once you have to concentrate to keep from making yourself dizzy.  The old, traditional, and modern all come together almost seamlessly.  Cats rules the streets.  You will seldom see a dog, especially not a stray one.

Leave the medina, and you find yourself in a fairly modern city.  How modern?  Well, it hosts the first “cyber park” I’ve ever seen.  Free Internet kiosks are found throughout the park.  There is also free WiFi and a nice cyber cafe near the middle of the lush park.

Just when you think it can’t get any louder inside the ancient square from all the people talking; the scooters, mopeds, and cars honking their horns; the donkeys braying; and the “music” from the snake charmers filling your ears, the calls to prayer threaten to shatter your eardrums as they blast from loudspeakers located in at least four mosques surrounding the square.  Each imam seems to be trying to outdo the other as they sing/chant.  It is a jarring sound that quickly becomes one of your most favorite.  Except, perhaps for the volume.  And it is a little less appreciated at 5:10 AM. 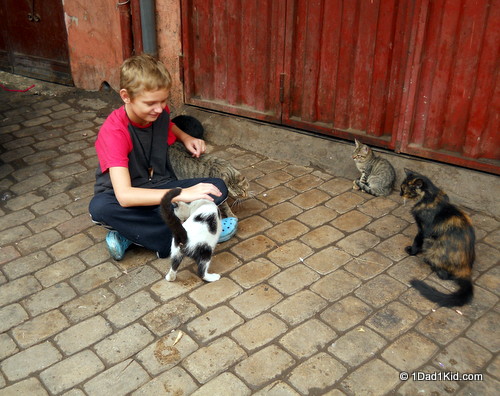 As we sat at an outdoor restaurant waiting for dinner last night, I could hear the snake charmers playing.  I sipped mint tea while I watched smoke billow from the tents where a variety of traditional fare is prepared and sold.  Tigger played with the ever-present cats while the call to prayer rang out.  I watched the sun slowly sinking behind the red walls of the city, and I had one of those moments where you feel like your life is just a dream.

Was I really in northern Africa?  In mysterious Marrakech? I had wanted to visit this place for years and years.

Despite the pungent aromas and loud Arabic words praising the greatness of Allah infiltrating my nose and ears, I still wondered if this was all real.

If this life of mine, this life I’ve created for myself, is truly just a dream, I’m not interested in waking.

Have you ever been to a place that affected you this way? Where was it, and what was it like?