Budapest is a phenomenally gorgeous city and has many nicknames, including The Paris of the East. Perhaps one of its lesser-known titles, though, is The City of Baths. Once you visit Budapest you quickly realize just why that name is so apropos. The Budapest baths are hard to beat.

While they are superb places to relax, in Budapest these thermal baths are taken seriously. There are clinics dedicated to balneological treatments connected with many of the spas. The styles and surroundings can differ greatly. Some have retained much of their earlier Turkish bath history while others are grand visions of art nouveau. Most of them operate year round, and you can find baths that are indoors and/or outdoors. Even the local water park, complete with waterslides and a wave pool, has a few thermal baths.

Their websites even include information as to the mineral contents of the water in the various pools at a spa and which conditions are best treated. At the more clinical ones, you can even include a rheumatological workup and examination as part of your visit.

Like I said, they take their thermal baths seriously.

Most, if not all, of the baths also offer spa services, and they’re relatively inexpensive so it’s pretty easy to pamper yourself during a visit.

You can also find some baths with salt rooms which are reportedly great for people with allergies and respiratory issues.

Strandfürdő means they have open-air pools and/or a beach.

Gyógyfürdő denotes a spa (thermal bath). You’ll often see this term followed by “és Uszoda” which means they also have a swimming pool.

It’s always a good idea to double check a bath’s website before heading out. A few of the ones that are more popular with the locals have a gender-specific schedule, and a couple also have clothing-optional times. For the most part, though, the baths are coed and require appropriate swimwear.

Some are open only during specific days, and others may close during parts of the day for maintenance or to ensure space for clinic patients.

Most of the baths state they will not allow children under 14 to use the thermal spas. However, this doesn’t seem to be enforced as I’ve seen much younger kids using the thermal pools. If you’re visiting with younger kids, you may want to go to Palatinus (see below) or some of the spas that are more multiuse, though.

The biggest concern they have is with young children in the hotter thermal baths. The cooler pools aren’t usually an issue.

When looking at prices, you will note a column for a cabin. This is a private changing area that locks. These vary in size, but generally 2 people can stand in there at the same time. They’re kind of nice because you can leave bags, larger items, hang your clothes, etc.

Lockers are much smaller and are a bit cheaper than the cabins. Many of the locker areas are coed with changing rooms. So you won’t want to start stripping out of your clothes in front of the locker until you’ve confirmed you’re in a gender-specific room. I almost made this mistake at the first bath we went to. I took off my shirt and noticed some women walking around which gave me pause. Then I noticed people coming out of changing rooms and realized what was going on.

When you pay for admission, you get a waterproof wristband that functions with the electronic locks for the cabins and lockers, although some of the baths still use a lock and key. In these situations, there is an attendant. You give them your receipt, and they take you to a cabin. They’ll lock it when you’re done and reopen it for you when you return. You’ll usually get a small chip which identifies for them which cabin is yours. 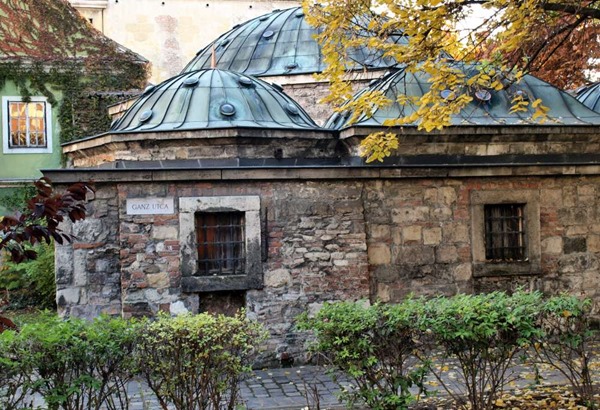 While many of the men will be wearing Speedos (oh, Europe!), you’ll also see plenty of men wearing longer trunks like board shorts. They aren’t overly picky, but don’t expect to be able to wear cut-offs.

Many visitors to Budapest baths, particularly women, wear a swim cap, but it usually isn’t required.

Obviously, you’ll want to bring a towel. It’s also a good idea to bring some type of sandals or flip-flops. We have gone barefoot, but almost everyone wears something on their feet when walking from the lockers to the pools, and we did have one bath staff person make a fuss when he spotted Tigger going barefoot down a hallway.

Many places offer towel rental if you don’t have one. The posted price includes a deposit, and you get the deposit back when you return the towel. You can also rent swimwear at most of the spas.

One of the baths we visited had water fountains that contained mineral water (as in full of minerals, not bubbly water) that was cool water. A couple had more traditional water fountains. Some had nothing. It’s acceptable to bring a non-glass water bottle with you to the baths, so feel free to bring something so you can keep hydrated.

A lot of the baths have a cafe or place selling refreshments, but they are usually located in the “dry areas” so bringing your own is recommended.

Most of the Budapest baths are part of the spa system (my description); however, some aren’t. This website is a great reference for the main baths.

The two that are the most famous are Széchenyi and Gellért with the former being the main draw for tourists. The Széchenyi baths, the largest medicinal bath in Europe, are indeed gorgeous and are located in a fabulous, huge park. I avoided it, however, because of the massive crowds that tend to be present. When a spa has fast track tickets, it’s probably one I’m going to avoid. It’s also one of the more expensive spas. 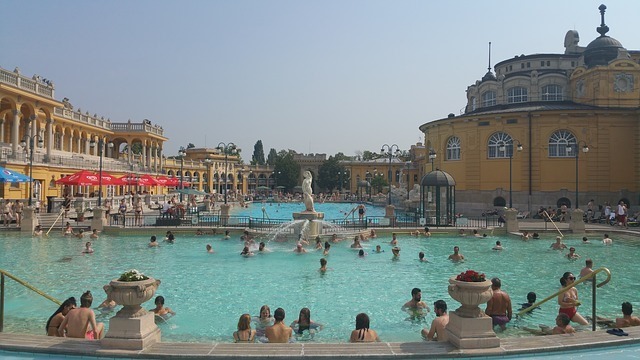 Gellért is absolutely gorgeous; however, as I was looking for the ones that were more popular with locals, I didn’t make it there. They also have “naturist sundecks” and some fabulous views. You can also rent private baths for 2 people (which includes champagne, fruits, and sauna).

Another bath I didn’t get to is not well known at all—Veli Bej. It is another bath that is a mix of modern and medieval and recently underwent quite the impressive renovation.

This one is probably my favorite. Its construction began in 1565. It’s a great mix of old and modern. I like going here during daylight hours because the dome above the main pool allows streams of natural light to come through which just adds to the ambiance.

It’s also one of the cheapest ones to visit.

Note: Don’t come here during peak times, especially on the weekends, unless you bring ear plugs. The natural acoustics in the main pool area mean voices carry. When you have a bunch of people yapping away, it can get really loud. My first visit was during a weekend evening in the summer, and it was packed with British university students who didn’t get the hint to lower their voice from the many dirty looks.

This bath gets mostly locals and is connected to a large clinic, although there are a few more tourists because admission is included with the Budapest card. However, it is one of the local favorites.

They have some really nice pools, but it’s a bit more confusing to navigate due to its large size and extreme lack of non-Hungarian signage.

There are also outdoor lap pools, but the water is not heated and is usually at around a nice chilling 23C/73F degrees. It feels much colder, though. We stuck a foot in the water and quickly headed indoors for the thermal pools instead.

Night bathing is one of the popular things to do in this medieval Turkish bath. Most of the Budapest baths close at around 8-10 PM, but on Friday and Saturday nights this particular bath is open from 10 PM to 4 AM.

Mixed gender use of the steam bath is only allowed on the weekends, so this is one where you’ll want to double check the schedule. Currently, the steam bath is reserved for women on Tuesdays. Saturday and Sunday are mixed, as is the night bathing.

The swimming pool and wellness section, however, is coed.

This thermal bath has a much more modern setting and is also quite inexpensive. 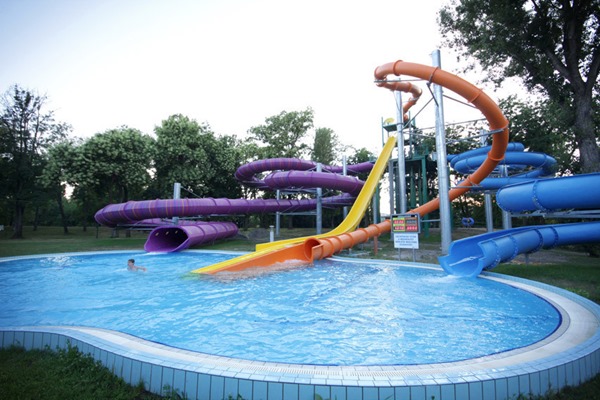 This is a fun water park located on Margaret Island, which is located in the Danube River and is very accessible from both sides of the city. You can walk, bike, or take public transportation easily.

Admission is extremely reasonable, and they have special discounts for families (including single-parent families!).

There are lots of slides, a wave pool, a large kiddie pool play area, lap pool, thermal baths, and more. You can bring drinks and food, but you can also find very reasonably priced (they don’t mark-up their stuff) items.

There are areas with lounge chairs, but there is also plenty of grass where you can put down a blanket and stretch out.

Unfortunately, they are only open during the summer (late June until early September).

Many of the above baths offer outdoor pools, but I found this website to be a great resource, especially since it lists places that most visitors wouldn’t know about. They also list some family-friendly spas.

As the baths are a part of the local culture, one should definitely visit at least one of the baths to get a taste of local life.

Have you been to any of the Budapest baths? Which was/is your favorite?