Ok, so now you’ve arrived on our little island. Where’s some good food? People know me for my sometimes blunt honesty, and we’ve lived here for 7 months so I’ll be perfectly honest again:  Don’t expect haute cuisine.  Most food is just average, some is quite good, but you won’t find food here that knocks your socks off.  Unless you’ve spent a LOT of time in Central America away from places like Antigua, Guatemala.  Unlike the mainland fried chicken does not dominate here, but there isn’t a huge variety either.  One of the things I love about Utila is that while its main economy is supported by diving-related tourism, the island pretty much has refused to become another Roatan and change drastically.  There are no chain restaurants here.  Each place is unique in some regard.  One thing, though, I’d love to change is the lack of good produce.  It’s a rare find here.  I never imagined I’d go crazy over finding a nice banana or apple before I moved to Utila. 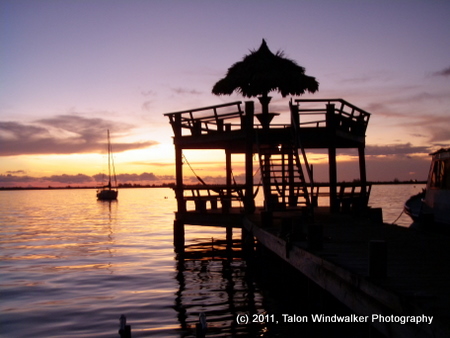 Comida tipica:  This is your typical find in Honduras, other than fried chicken.  Baleadas are very popular (tortilla with refried beans, cheese, and anything else you’d like to add folded over and eaten with your hands).  My favorite place closed down unfortunately.  However, other good places for baleadas are: Thompson’s Bakery (up the hill from the crossroads), the baleada lady who is sometimes found in front of Main Street Bar (aka The Casino), Lidia’s, and Blue Shore Cafe (found at the Deep Blue Divers shop).  Others really like Doña Rosa’s.  I got sick after eating there as have several other people I know, but then again I know others who have eaten there a few times a week for years with absolutely no problem whatsoever.  My favorite comida tipica place is Thompson’s Bakery.  They serve breakfast, lunch, and dinner there.  The jonnicakes (kind of like a fried egg sandwich served in a wonderful coco bread biscuit) are good, and if you’re there when the cinnamon rolls are fresh THEY ARE SO GOOD!

Fast food (not that type):  You just got off the vomit comet after hours of traveling and you’re so hungry you’re about to gnaw your travel companion’s arm off.  Eating a bean-laced thick tortilla doesn’t sound appealing to you?  Head right over to Mermaid’s (turn right at the crossroads [the intersection after exiting the ferry] and walk for about 3 minutes).  The food is served cafeteria style, although you can order off their menu as well, but it’s actually pretty decent and inexpensive.  Tip:  Thursday night is 2-for-1 pizza night, but their pizza is super bland. Also they are closed from Friday at sundown to Saturday at sundown (they’re Seventh-Day Adventist).  If you’re not quite THAT hungry but still don’t want to wait around, just to the side of Captain Morgan’s is a little stand that sells pastelitos (basically meat-filled empanadas) that are pretty cheap.  Doña Rosa’s also has good pastelitos, but see previous comment.

Pizza:  There are a few options on the island.  But if you want good pizza you really only have 2 choices.  For super thin crust, and I DO mean thin, go to Pizza Nut, about 3 minutes past Mermaid’s.  They are only open after 5 PM.  It’s pricier than Mermaid’s but tastes WAY better.  Your best option is Skidrow’s.  Yes, the name sounds awful, and when you see the building you’ll probably challenge my judgment.  Trust me.  A friend from Chicago said their pizza rivals some of the best pizza he’s ever had.  Their pizza really is damn good.  They recently started serving calzones, and I’m hooked. I like those even more than their pizza.  While there consider sharing jalapeño poppers.  They are ginormous and extremely good.  They also have free WiFi, and if you don’t want to miss out on American football games, basketball, or hockey, this is the place to be.  While there consider earning yourself a Skidrow T-shirt by drinking 4 shots of the local herbal-infused rum called Giffity (and spelled numerous ways).

Steak:  The best places are La Piccola’s and RJ’s (only open Wednesday, Friday, and Sunday nights).  I have heard good reviews of Driftwood which imports their beef from the States reportedly; however, I’m not sure they’re worth the long walk.  The last few times I’ve been there they’ve had their kitchen closed for some random reason, and you definitely pay a premium for that imported meat.  RJ’s is less expensive and has wonderful portion sizes. You won’t leave there hungry. 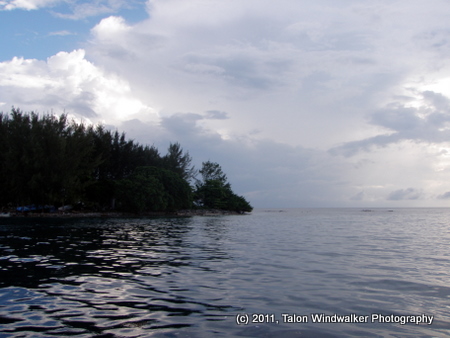 Seafood:  RJ’s is in top position for this one.  Not only is their fish excellent, portion sizes are large, and it’s cooked to perfection, but they only buy the fish from fishermen who use sustainable practices, i.e., don’t fish off the reefs.  You’ll find it just before the bridge, right across from Alton’s Dive Centre.  They are open for dinner on Wednesday, Friday, and Sunday.  If you want a little more unique experience, stop at Babalu’s.  The fish is a bit overcooked, but they have a decent selection and an unusual setting.  Their rum punch is quite tasty, too.  Get the outdoor seating for some great sunset views or enjoy watching the fish from their floor “aquarium.”  Don’t be surprised if you spy the occasional ray or octopus going through.  If you like tuna, Main Street is another good option.  They have wonderful sauces, and their tuna is usually cooked so it’s still a little pink in the center.  They also have good portion sizes, and since they’re upstairs you don’t have issues with sand flies.

Ethnic:  The best in this category, and the best restaurant on the island in my opinion, is Indian Wok.  They serve Asian-inspired food and are also your best bet if you or your friends are vegetarian.  No worries, they have great meat dishes, too.  If you’re craving a salad, the Asian salad is AWESOME.  It is the only salad served in a restaurant on the island that has mixed greens (bought from nearby Roatan where it’s grown hydroponically, also available for purchase in bags at Bush’s).  You’ll find them next to Parrot’s Dive Center and Tranquila (one of the most popular bars on the island).  For Italian your only option is La Piccola.  The pasta dishes are reportedly prepared daily and are quite good.  They also serve some very tasty bread and have some decent wines.  El Picante advertises themselves as a Mexican restaurant, but that really means it’s Gringo-version Mexican.  The chips are pretty good, and they have some wonderful mixed drinks (try the Chimpanzee or the 800-pound gorilla).  Also a great place for sunset views while dining or drinking.  You’ll find them in the bright yellow building next to the bank.  Che Pancho’s is located at the bookstore/video rental store/cinema.  They serve South American-inspired food as well as Tigger’s local favorite of a bacon hotdog.  They are also my top choice for licuados (basically a smoothie or blended fruit drink).  My favorite meal to get there is the milanesa a caballo (chicken schnitzel served with 2 eggs sunnyside-up resting on top).

Cheap eats:  Want something fairly cheap but don’t care if it’s pretty much American-style food?  Big Mama’s has some excellent chicken poppers and chicken fingers.  I also like their mashed potatoes with gravy.  They’re super nice people and very family friendly.  Seven Seas has better fries and makes a wonderful bacon cheeseburger.  During hot weather they also serve shaved ice treats outside the restaurant.  Blue Shore Cafe has pretty good food with a menu that changes regularly and also has a nice selection of rum infusions.

Breakfast:  Munchie’s and Buccaneer’s serve American breakfasts, as well as continental and tipica styles, and really that’s the only time we go to either one.  The prices are higher, they add on a 10% service fee, plus the 12% government tax, food is completely average, and the service is usually slow and poor.  At Buccaneer’s Tigger’s favorite breakfast is the American and mine is the Two Tank.  Thompson’s Bakery is an excellent breakfast choice.  If you’re jonesing for a bagel, though, head down to Camilla’s Bakery (aka Pizza Nut at 5 PM).  They’re made fresh every morning and are pretty tasty.

Ice Cream:  It gets hot in the Caribbean.  The best ice cream shop we’ve found on Utila is Kob’s located in the Bambino’s grocery store.  They typically shut down during the biggest lull in the tourism season (October through most of January), though.

My top 2 restaurant recommendations are Indian Wok and RJ’s.  If you don’t mind a bar scene, then Skidrow is another great option.  Want to cook at home? No problem. We’ll cover that in a later post.